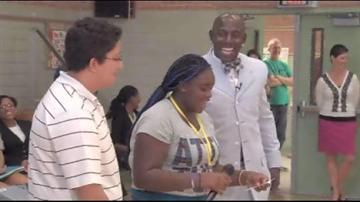 MILWAUKEE-Donald Driver sure knows how to make an entrance. He entered the Jeremiah Curtin Leadership Academy to thunderous applause and then delighted the students by showing off some of his championship dance moves.

Driver is in town as part of a bullying prevention program that was organized by Children's Hospital of Wisconsin and MPS.

\"When you have issues that you know touch the nation, you have to address it,\" Driver told CBS 58 News.\"I'm just glad that it started here in Wisconsin first.\"

Driver is helping to reinforce the importance of reducing school harassment through the release of his newest book, \"quickie Stand up to a Bully!\" which is set for release later this year.

During the 2013-14 school year, more than 40,000 students in more than 100 school districts participated in Act Now! statewide. Over the past several years, statewide efforts have shows a 32% decrease in reports by boys of being bullied.

There was also a 26% decrease in physical bullying.