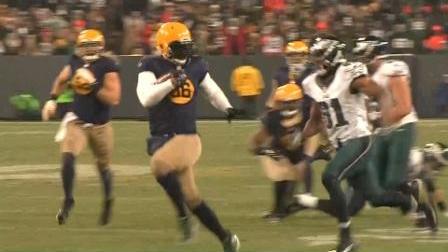 The win, combined with a Detroit Lions 14-6 Loss in Arizona, puts the Packers in a tie with the Lions atop the NFC North, each with 7-3 records with their second meeting coming in Week 17.

Aaron Rodgers threw for 341 yards and three touchdowns. He set an NFL record with ten consecutive starts at home without an interception.

The Packers scored in every phase of the game, scoring on three returns for touchdowns. Micah Hyd returned a punt , Julius Peppers returning an interception and Casey Hayward scooping a fumble--all for scores.

Green Bay will travel to Minnesota to play the Vikings next Sunday.