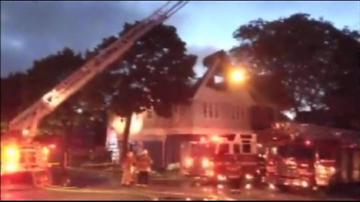 Officials said the call came in at 3:45 a.m. at a home near E. Burleigh and N. Richards streets.

Firefighters initially saw a small fire in the attic, but the flames quickly escalated and crews began a defensive attack.

Shorty after, the roof collapsed.

The home was vacant, and neighbors tells CBS 58 News that a man was recently evicted from the home and that his belongings were scattered all over the yard.

Authorities say the fire is being investigated as suspicious.