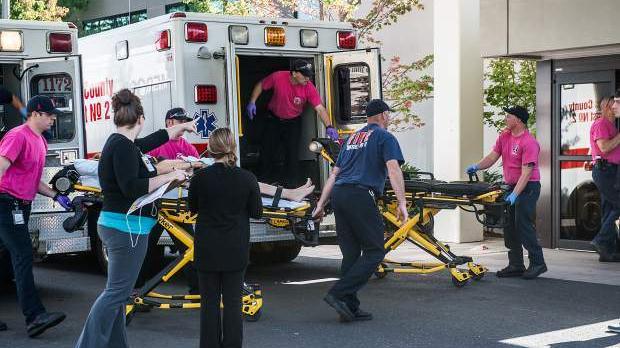 After learning about an active shooter at Oregon's Umpqua Community College, officers from around Douglas County "engaged that suspect (and) there was an exchange of gunfire," Douglas County Sheriff John Hanlin said.

He told reporters the shooter is dead.

Douglas County Commissioner Chris Boice told CNN that the shooter is in custody. It was not immediately clear whether the shooter was injured.

Investigators are examining social media postings made by a man, thought to be in his late 20s, who they believe is the suspect, said a source with knowledge of the investigation.

The night before the attack, the alleged shooter appears to have had a conversation with others online about his intentions, the source said.

He said that two patients died while being transported to a hospital.

The shooting appears to have started in one building before the gunman moved to the school's science building, the source told CNN. Those killed and wounded were found in at least two classrooms.

Mercy Medical Center posted on Twitter that it had received nine patients, with three more on the way. The extent of their injuries was not known.

Three victims arrived at PeaceHealth Sacred Heart Medical Center at RiverBend in Springfield, about 70 miles north of the shooting scene. Two more are on their way, that hospital tweeted.

ATF agents were also on scene and canine teams are en route to search for explosives, fire arms casings and ammunition, a spokesman said. The FBI was en route.

'This is so out of character'

Earlier, authorities had said they were responding to reports of an active shooter at the Roseburg college campus.

The school itself is up on a hill outside the city center, according to Rick Francona, a CNN military analyst who lives nearby. Francona said that logging is a big industry in the region, which is fairly rural but easily accessible from Interstate 5.

"This is so out of character for this whole area," he said.

News of the shooting quickly reached Washington, with the state's senior senator, Ron Wyden, visibly shaken and Sen. Jeff Merkley tweeting that he was praying for the victims and their families.

President Obama was briefed on the situation and will continue to receive updates throughout the day.