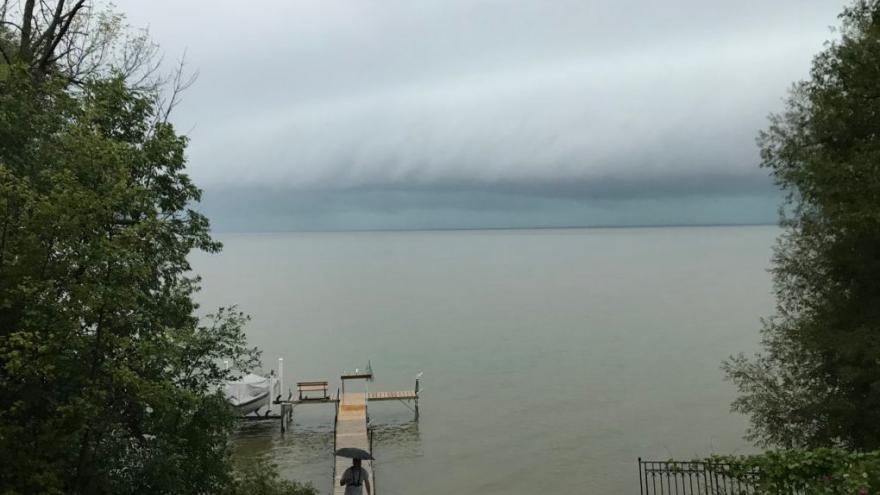 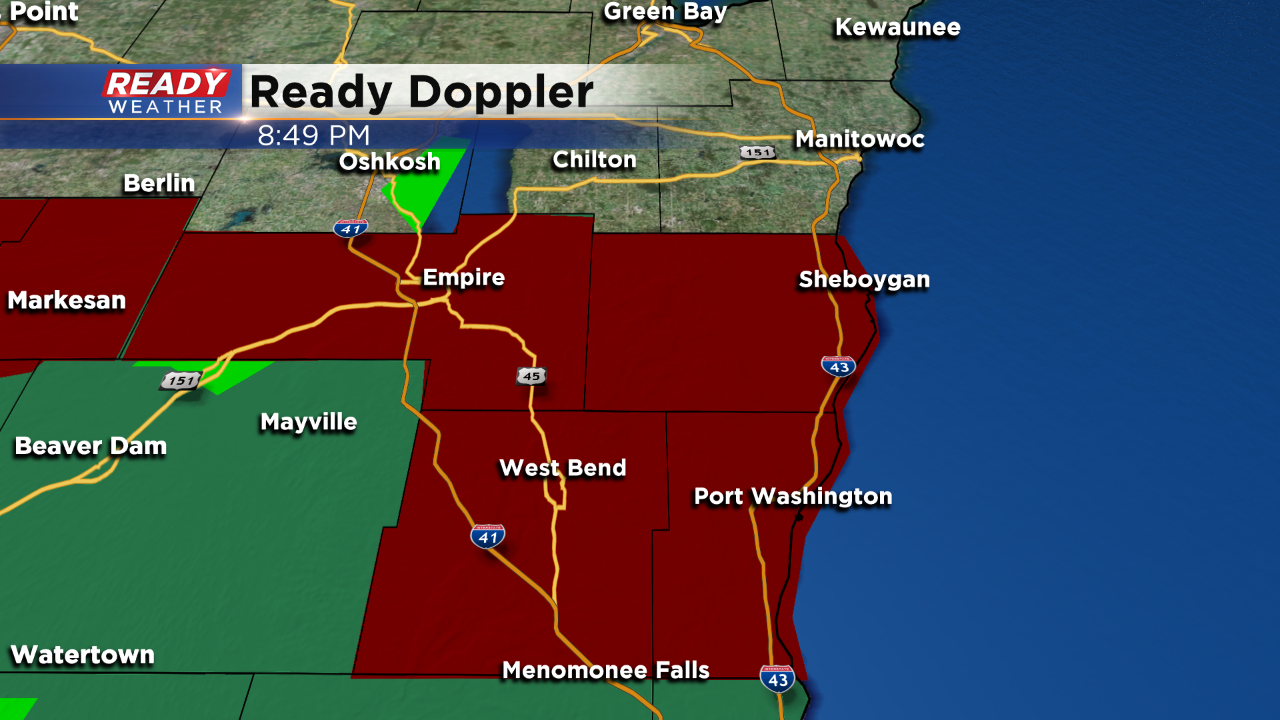 The flash flood warnings for Fond du Lac, Sheboygan, Washington, and Ozaukee counties has been extended until 6:30 am on Wednesday.  Please use caution around flooded areas within those counties. 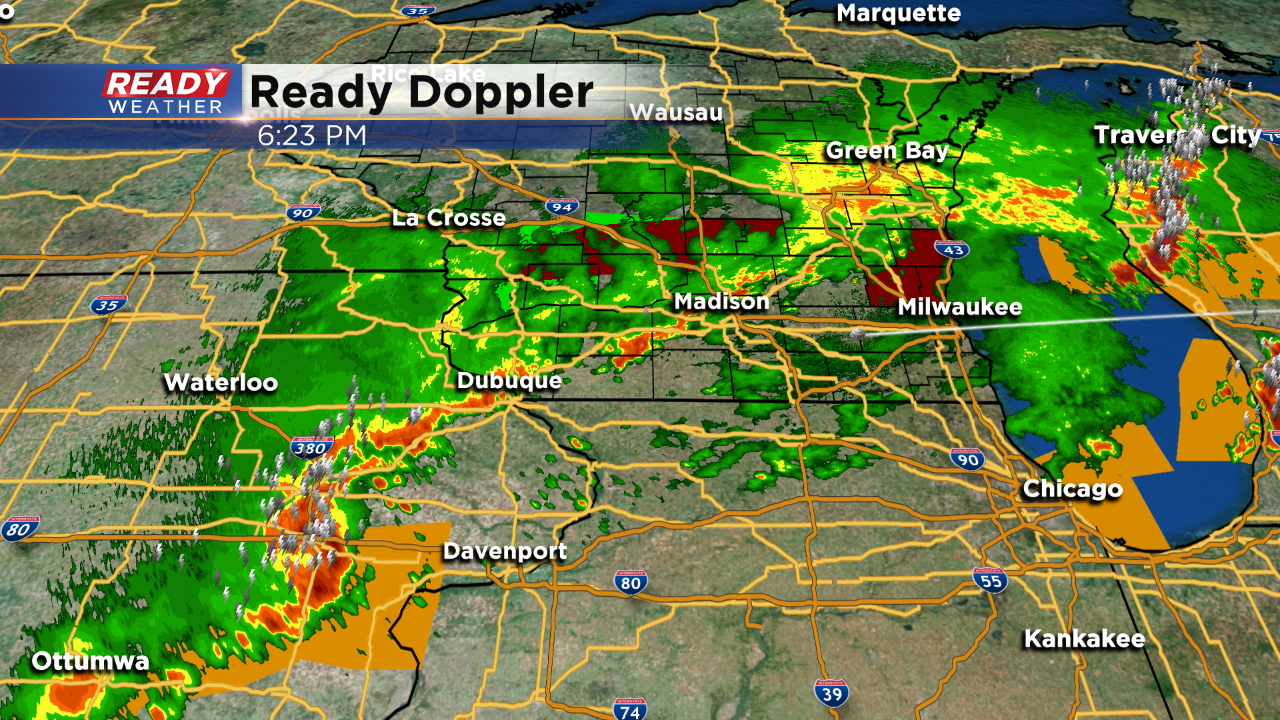 Scattered showers and storms are developing across Iowa tonight.  Those storms are pushing northeast and could make a run at our area later this evening.

Heavy rain and flooding are the main concerns for tonight as additional rain and storms will move back across flooded areas.

After a very active Tuesday afternoon, the severe risk is starting to die down a little across southeast Wisconsin. The focus now shifts to a flash flood threat. Flash flood warnings have been issued for all of Fond du Lac and Sheboygan Counties and the northern part of Ozaukee and Milwaukee Counties until 10:30 p.m. 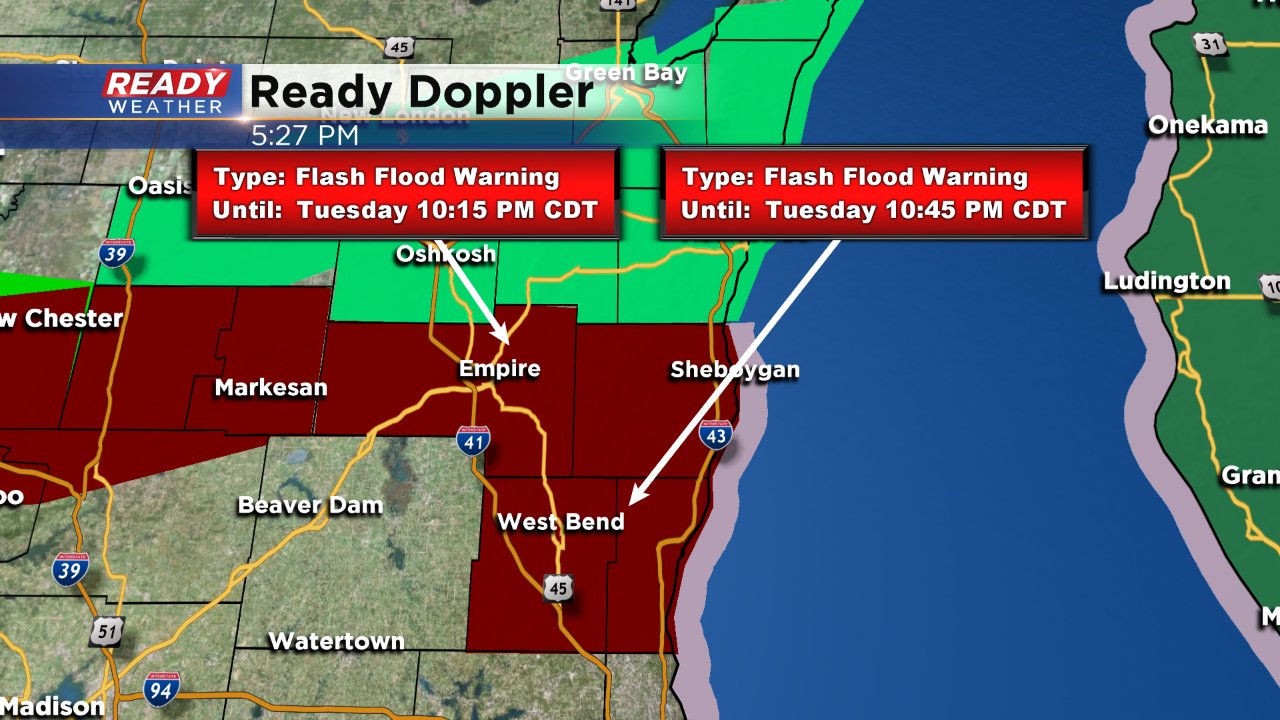 In addition, more severe storms are possible Tuesday evening. A severe thunderstorm watch remains in effect for everyone except Walworth, Racine and Kenosha Counties until 9 p.m. 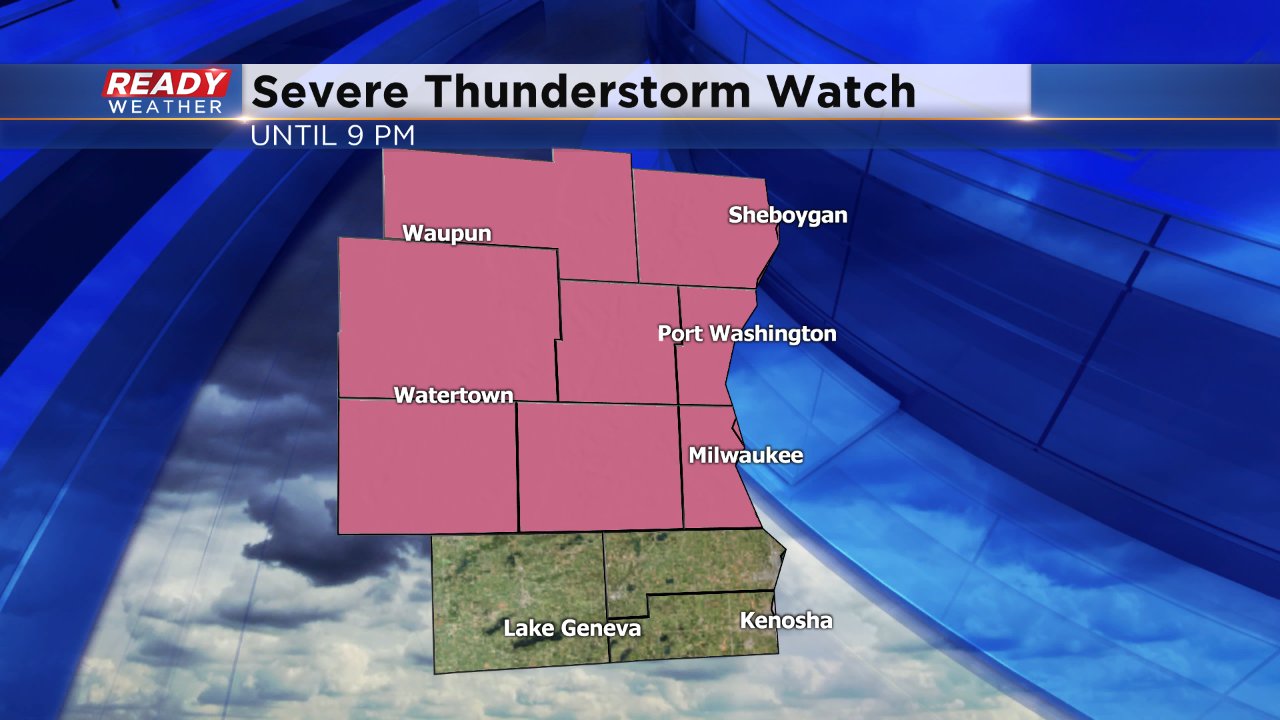 At 500 PM CDT, severe thunderstorms were located along a line
extending from near Cleveland to near Oostburg to near Saukville,
moving east at 45 mph.

For your protection move to an interior room on the lowest floor of a
building.

Continuous cloud to ground lightning is occurring with these storms.
Move indoors immediately. Lightning is one of nature`s leading
killers. Remember, if you can hear thunder, you are close enough to
be struck by lightning.

The National Weather Service in Milwaukee/Sullivan has issued a

* At 426 PM CDT, a confirmed tornado was located near Campbellsport,
or 10 miles north of Kewaskum, moving east at 60 mph.

SOURCE...Weather spotters confirmed tornado. Multiple reports of
tornadoes have been received with this storm across Fond
du Lac County.

IMPACT...Flying debris will be dangerous to those caught without
shelter. Mobile homes will be damaged or destroyed.
Damage to roofs, windows, and vehicles will occur. Tree
damage is likely.

To repeat, a tornado is on the ground. TAKE COVER NOW! Move to a
basement or an interior room on the lowest floor of a sturdy
building. Avoid windows. If you are outdoors, in a mobile home, or in
a vehicle, move to the closest substantial shelter and protect
yourself from flying debris.

2:00 PM Update: A new severe thunderstorm watch has been issued until 9:00 pm for most of the area.  The exception is our southern counties; however, that could change at some point.

The atmosphere is becoming increasingly unstable with high humidity and surface temperatures in the 80s.  We expect storms to quickly develop this afternoon and evening.  All modes of severe weather are possible; however, damaging winds and flooding rainfall are the two top threats.

12:00 PM Update: The timing for strong to severe thunderstorms will be this afternoon into the evening and hasn't changed.  A large line of thunderstorms will develop in western WI and track east-southeast.  The leading edge of the storms could produce widespread severe weather, especially damaging winds 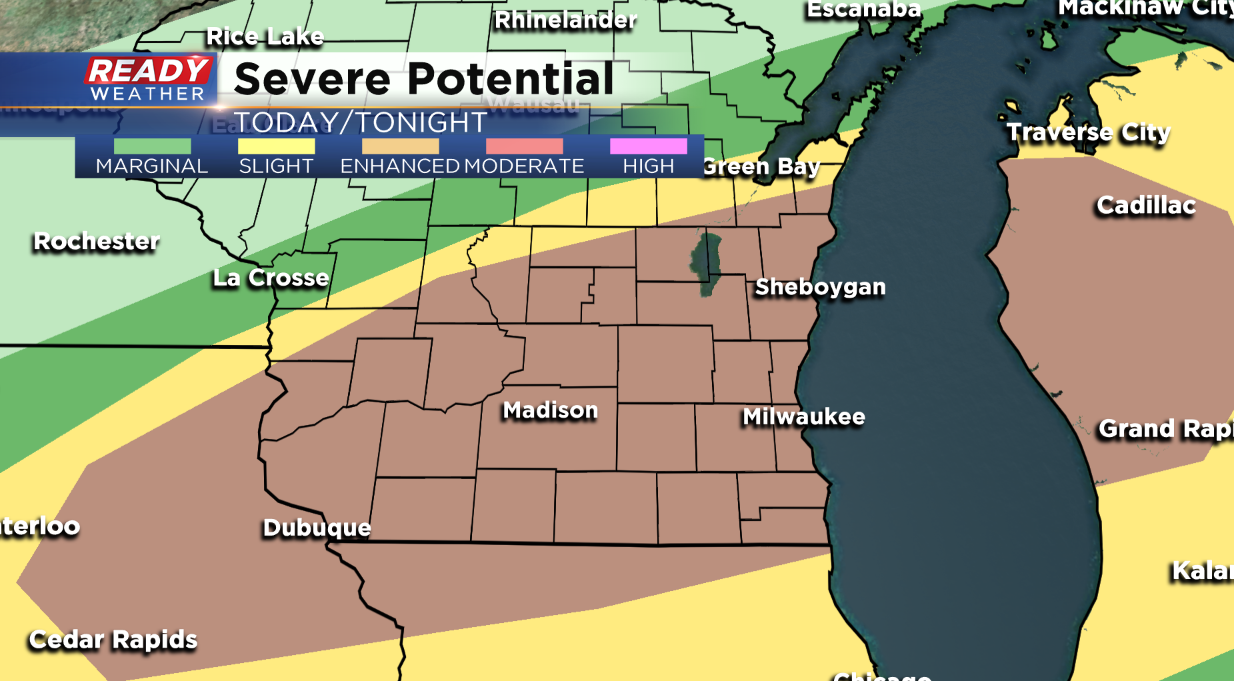 A line of storms this morning will produce more heavy rain and possibly minor flooding. 2”-4” of rainfall will be added to totals from yesterday. The line will clear out and we will see some sunshine late this morning and this afternoon. This will lead to another line of showers and storms. Some of these storms could be severe with all modes of severe weather possible with large hail, damaging winds, and torrential downpours with more flooding. 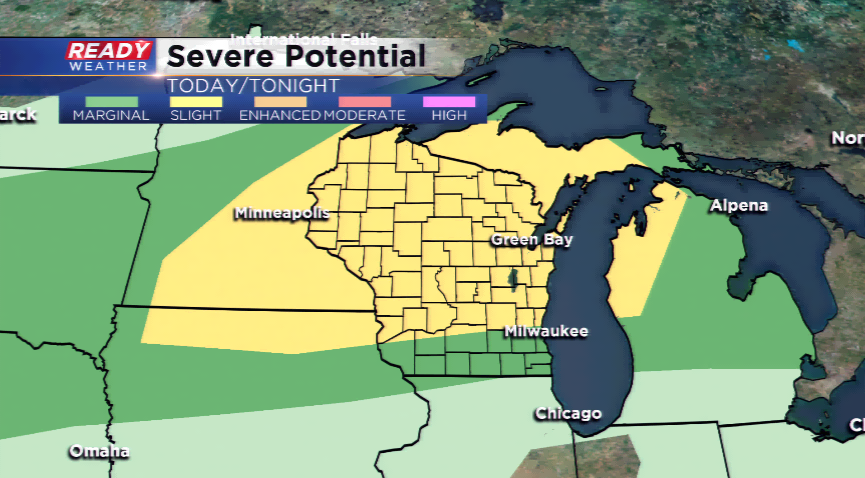 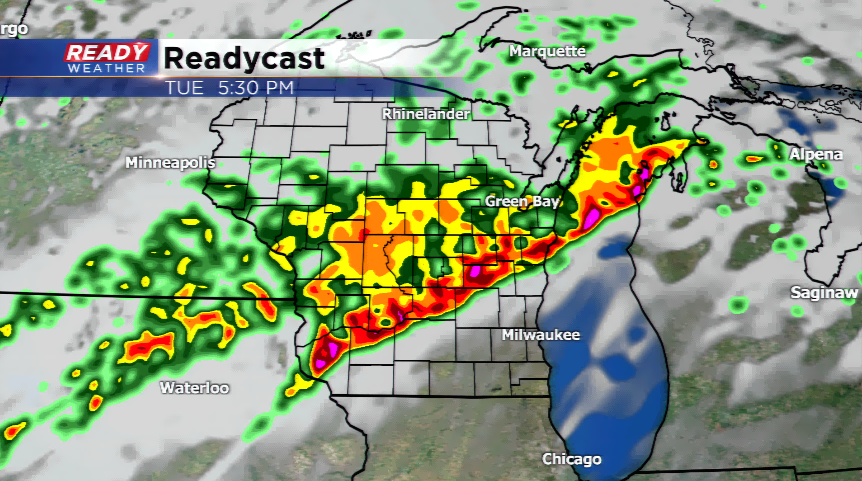 Speaking of flooding, the NWS has issued a Flash Flood Watch for all of southeastern Wisconsin except Walworth, Racine, and Kenosha until Wednesday morning. The timing of the storms will be as early as late this afternoon into early tomorrow morning. The cold front, which will produce the widespread storm activity, will usher in much cooler, drier air for the middle of the week. Temperatures will struggle to make it out of the 60s by tomorrow. The dew points will plunge into the 50s and it will feel much more comfortable. 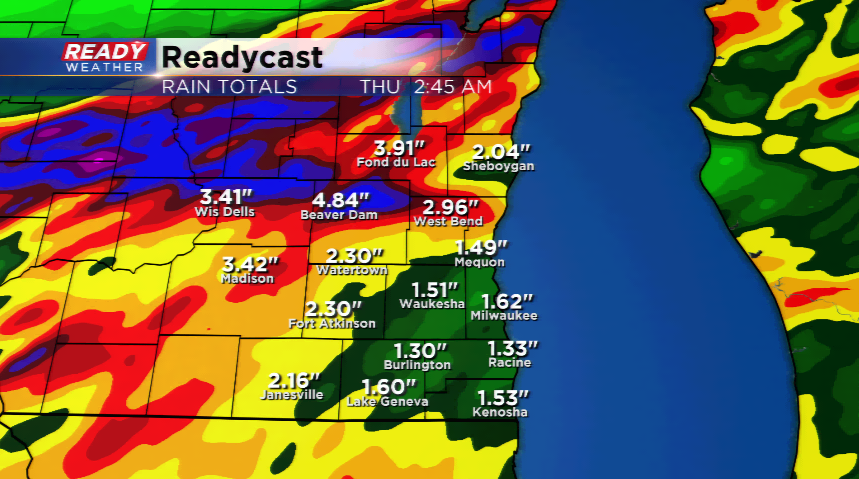