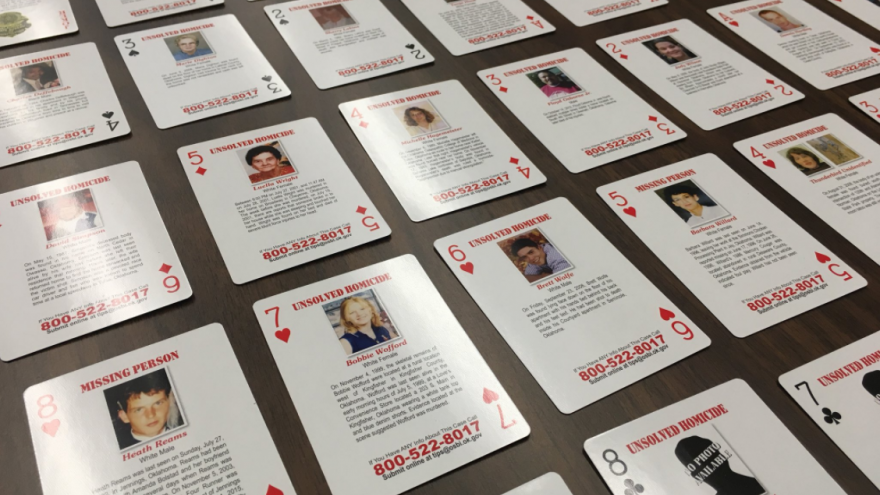 OKLAHOMA CITY (AP) — Oklahoma authorities are hoping to solve killings and other cold cases by selling playing cards that feature the cases to prisoners.

The first in a planned series of decks is already on sale for $1.42 at six of the state's lockups, and a second deck is already being planned.

The cards are reminiscent of those distributed to U.S. troops during the Iraq War that featured members of Saddam Hussein's government, except these feature unsolved cases from 1978 through 2013.

Florence said other states, including Florida, Colorado, Connecticut and South Carolina, have similar programs that have led to the solving of about 40 unsolved homicides.

Joe Allbaugh, the state Department of Corrections director, said each deck costs $1.09 to produce, and the profits will be used to new decks featuring other unsolved cases. Eventually, they'll be the only cards inmates can buy.

"There are individuals, believe it or not, who share information, even though they're incarcerated," Allbaugh said of inmates who provide information about unsolved crimes.

Maria Wilson, whose mother Marie Dighton's 2008 killing in her Buffalo Valley home remains unsolved, praised the playing cards program. Wilson, of Guthrie, said it's impossible to fully move on, despite the years that have passed.

"I hear that all the time, 'well, we'll get justice, you know, when they meet their Maker.' Well, I want justice this side of heaven," she said.