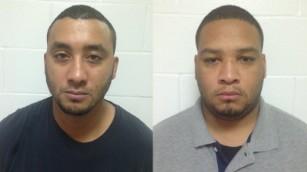 (CNN)Two police officers have been arrested in the shooting death of a 6-year-old boy this week in Louisiana, authorities said.

Jeremy Mardis was hit by five bullets in the head and chest as the officers pursued his father's car Tuesday, according to CNN affiliate WAFB.

His father, Chris Few, is hospitalized.

"We took some of the body cam footage. I'm not gonna talk about it, but I'm gonna tell you this -- it is the most disturbing thing I've seen and I will leave it at that," Edmonson said Friday night.

Few was not armed, the affiliate reported. It's unclear what led to the pursuit.

Marksville is about 90 miles from Baton Rouge, the state capital.