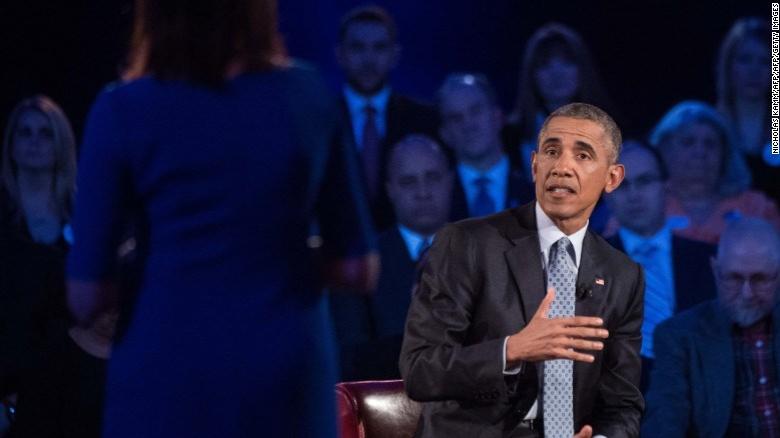 (CNN)A president who has vowed to politicize gun control and critics who believe he's determined to confiscate their weapons came face-to-face Thursday in a rare respectful and reasoned interlude in one of America's most poisoned political debates.

For once, the nation's bitter, polarized politics failed to swamp a conversation on gun violence. In a CNN town hall moderated by Anderson Cooper, President Barack Obama faced off against critics of his new executive actions, including expanded background checks for gun sales -- but both sides listened carefully, referred to shared concerns and avoided histrionics. One absent voice: the National Rifle Association, which declined CNN's invitation to participate.

It was the kind of civilized exchange that some Americans thought they were in line for when Obama took office in 2009 promising to cleanse American politics of its "petty grievances" and "recriminations and worn-out dogmas."

But the partisanship strangling Washington soon had Obama complaining that Republicans were obstructionist and unreasonable while GOP leaders saw him as polarizing and patronizing. The result has been that this side of the President's character has not always been on display.

The event at George Mason University in Fairfax, Virginia, came as Obama rededicates himself to an effort to reduce gun violence following a string of mass shootings and his own failure to get expansive reform efforts through Congress.

Obama fielded questions from supporters of his actions, including a priest, gun violence victims and a Chicago schoolboy who fears being shot, as well as critics ranging from a gun executive to a sheriff, a rape survivor and a murder victim's widow.

The meeting of about 100 people invited by CNN on all sides of the debate was an unusual forum for the President. While Obama has conducted hundreds of town hall events as a candidate and president, it's rare for him to hear so directly from ordinary Americans who oppose his policies.

His measured responses to questions also contrasted with the emotional and even angry tone he often uses while discussing gun control -- and the fiery debate on firearms currently reverberating through the 2016 White House race. For instance, in the aftermath of a mass shooting in Oregon in October, Obama said that such killing sprees were "something we should politicize."

But while Obama respectfully conversed with those who questioned him in person, he did not spare his foes in the gun rights debate, accusing them of spouting "imaginary fiction" about his motives and evoking the partisanship that typically encompasses the issues.

"The way it is described is that we are trying to take away everybody's guns," Obama said. "Our position is consistently mischaracterized ... If you listen to the rhetoric, it is so over-the-top, it is so overheated."

He dismissed the notion that he was behind a plot to take away everybody's guns "so we can impose martial law" as "a conspiracy." And he tried to dispel it by pointing out that he lacked the time in office to take away the nation's 350 million firearms.

"I'm only going to be here for another year," he said.

But the President found himself on the spot as well.

Taya Kyle, the widow of the Chris Kyle, the soldier featured in the movie "American Sniper" who was later murdered in a gun crime, told him that tightening gun laws would not work and would only punish crime victims.

"The laws that we create don't stop these horrific things from happening. That is a very tough pill to swallow," Kyle said, saying that criminals would not be stopped from getting guns even if background checks were expanded. Like Obama's other questioners, Kyle's critique was delivered in a civil, calm tone often absent from the rhetoric of politicians engaged in the gun control debate.Obama's most vocal adversary in the debate was not present, however. In an interview on Fox News, the NRA's Chris Cox said Obama was "creating an illusion that he is doing something to keep people safe."

His comments, and Obama's criticism of the NRA, were a reminder of the hyper-partisanship of the guns issue that has helped to hamper any meaningful reforms to stem gun violence during the President's tenure -- and often halted movement on other issues as well.

But in the "Guns in America" town hall, Obama pleaded with citizens to at least come together on a limited set of measures to reduce thousands of gun deaths and regular mass shootings, striking a theme of unity and national possibility that was characteristic of the conciliatory rhetoric with which he made his political name.

"At least let's figure it out. Let's try some things," he said.

In an interview with Cooper at the beginning of the evening, Obama attributed some of the tensions over the issue to divergent perceptions on gun ownership between rural and inner city communities.

"Part of the reason, I think, that this ends up being such a difficult issue is because people occupy different realities," he said.

He also acknowledged that he himself has never owned a gun and had little experience with them, stemming in part from his upbringing in Hawaii, where he said sport shooting is not as popular as in other parts of the country.

He then disputed the notion that most criminals got guns illegally or through personal connections, making background checks -- a major focus on his policy initiative on guns -- of little utility.

"All of us can agree that it makes sense to do everything we can to keep guns out of the hands of people who would do others harm, or themselves harm," he said.The President also called on Congress to set up a system that is "efficient" and doesn't inconvenience lawful gun owners to create a background check system that would stem at least some illegal gun activity.

"The fact that the system doesn't catch every single person ... has to be weighed against the fact that we might be able to save a whole bunch of families from the grief that some of the people in this audience have had to go through," he said.

Obama made a similar argument in response to a question from Arizona Sheriff Paul Babeu, who said that the executive actions wouldn't have prevented the mass shootings that prompted much of Obama's push for greater gun control.

"How are we going to get them to follow the laws?" Babeu asked of those who commit gun crimes.

After Babeu was introduced as a Republican running for Congress, Obama responded with a hint of sarcasm as he wished him good luck in his race.

Though there were moments such as these when the President let his partisan colors show, for the most part Obama sought to address the concerns of gun owners in response to their questions. He also said he would be willing to speak to the NRA even though the organization declined to participate.

Showing the thorny nature of the national divide on the issue, a CNN/ORC poll released earlier Thursday evening found that a majority of the public supports the measures that Obama outlined this week but less than half of Americans think they will actually work.

Support for the measures crosses party lines, with 67% of those asked saying they favor the changes. Some 85% of Democrats, 65% of independents and 51% of Republicans support the President's moves.

But 57% of those polled also said that the measures would not be effective in reducing the number of people killed by guns. And 54% of people, including 79% of Republicans, disapprove of Obama's decision to go around Congress and implement changes to gun policy by using executive power.

Republican presidential candidates, many of whom have accused Obama of being obsessed with gun control and not sufficiently engaged in protecting Americans from attacks like the one launched by a radicalized Muslim couple in San Bernardino, California last year, panned his appearance.

"Look, any time that there's a crisis, a tragedy whether it's San Bernardino or these tragic mass killings by deranged people the first impulse of the president of the United States and Hillary Clinton is to take more rights away from law-abiding citizens," former Florida Gov. Jeb Bush said in a video.

"We need a President who will stop threatening legal gun owners, & start tackling the root causes of violent crime & terrorism in this county," Carson tweeted.

The messages were an indication that the different tone on the gun debate featured in the town hall meeting is unlikely to be embraced on the campaign trail or throughout Washington.