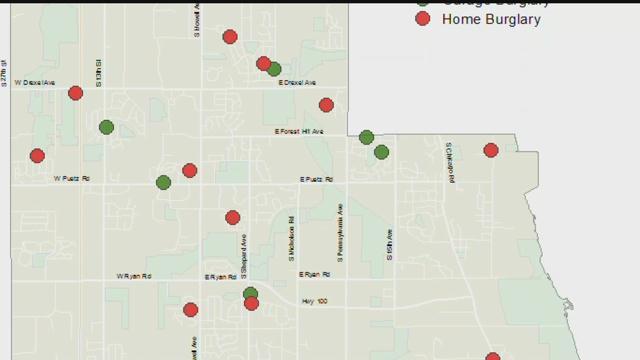 More than 40 home and garage burglaries in Oak Creek just in the last four months. A woman, whose home was broken in to on September 13, said woman and her family were inside at the time. In fact, her son was playing video games in the basement as the burglar was inside.

"It happened with lights on in the house," she said. "Didn't seem like it bothered them at all, it was very brazen."

The woman said she went to bed with the front picture window open.

"Open a little bit because there was a nice breeze the night before," the woman said.

Unfortunately, it was enough that the burglar popped the screen out, got in and out with her iPad, keys, purse and SUV. The woman said she didn't realize it until hours later and called police.

"OnStar found my car right away, they (police) went right away to get it," she added.

Steven Anderson, the acting Chief of Police for Oak Creek said it's scary. Over the last four months, there've been more than 40 burglaries from homes and garages.

"Open garage doors being entered, or unsecured doors to a garage or residence which can be prevented," Anderson said.

The woman, whose home was broken in to on September 13, said it's scary.

"They took a lot of things from me, material wise, but I think the worst thing that was taken from me is just my sense of security," she said.

Her car was found on the north side of Milwaukee, but the thief was not.