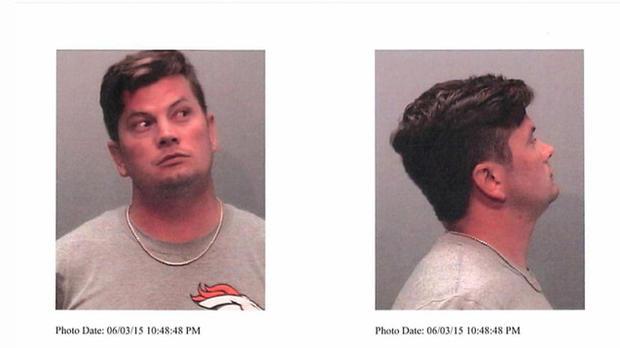 (CBS NEWS) The NFL is dealing with another case of alleged domestic violence following the arrest of John Bowlen, son of Denver Broncos owner Pat Bowlen.

He was taken into custody Wednesday night after police in Glendale, Colorado, responded to a dropped 911 call in which a Bowlen's girlfriend told dispatchers her address and then said, \"Hurry, please help!\" The call was then disconnected.

When police called the number back, Bowlen answered the phone, saying, \"This is the owner of the Denver Broncos. I am sorry, okay?\"

The 29-year-old works for the Broncos in marketing. He's also a candidate to take over the team's ownership from his father, who has Alzheimer's disease.

\"She's leaving now and I have nothing, there's nothing to be said at all,\" Bowlen told a police dispatcher.

\"Okay, but you understand that a female calling asking for help on 911 is kind of a big deal,\" the dispatcher responded.

\"Yeah. Yeah. This is ridiculous -- I haven't done nothing wrong,\" Bowlen said. Later in the call, he referred to himself as the \"blood of the city.\"

\"As blood of the city, I am telling you right now, nothing is wrong and she is leaving my house, okay?\"

\"Okay, then maybe you need help escorting her out,\" the dispatcher said.

Bowlen then hung up. He was later arrested after his girlfriend told officers he had shoved her against a wall.

The incident brings domestic violence back to the NFL'S doorstep. Last year, former Baltimore Ravens running back Ray Rice punched his then fiancée in an elevator.

That case and others prompted the league to overhaul its personal conduct policy. Now, any NFL employee who commits domestic violence is automatically suspended and an independent investigation is launched.

Days after the new policy was announced, defensive end Ray McDonald was dismissed from the San Francisco 49ers after a sexual assault allegation. The Chicago Bears signed him in March but released him two weeks ago after another domestic violence arrest.

\"Our policy is not the same as the criminal standard,\" Goodell said. \"It's a standard that says if you violate our personal conduct policy, you are subject to discipline.\"

That discipline was laid out in a Broncos statement to CBS News about Bowlen.

\"While this is a personal issue, he is accountable to all club and league conduct policies,\" the team said. \"As such, John will be placed on an indefinite leave of absence from the organization.\"

Bowlen was released from jail Thursday on a personal recognizance bond. He has been charged with misdemeanor harassment and obstruction of telephone service, both considered acts of domestic violence.

Last year, the Broncos were one of the first NFL teams to require a mandatory domestic violence training for all its employees -- including John Bowlen.