New York Gov. Cuomo says he had a 'productive' White House meeting with Trump on coronavirus 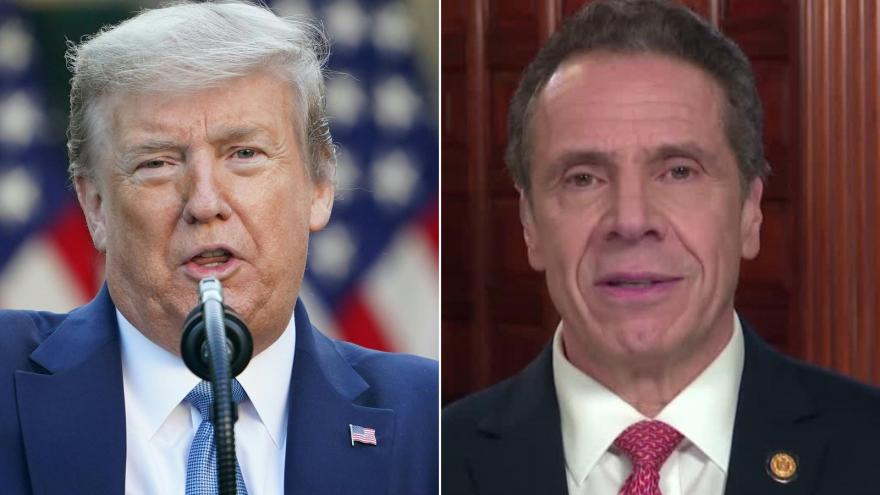 New York Gov. Andrew Cuomo said he had a "productive" meeting with President Donald Trump at the White House where the two discussed coronavirus testing.

"The meeting went well and I think it was productive," the Democrat said in a phone interview with MSNBC. "The big issue was testing as everybody knows that's going to be the next step as we go forward. And how do we separate the responsibilities and the tasks on testing vis-a-vis a state and the federal government and the acknowledgment that we will need to work together on this."

"It has to be a real partnership. And I think we had a very good conversation."

Trump has often sparred with his fellow New Yorker over the federal response to the coronavirus outbreak as the Empire State has struggled to cope with the pandemic. More than 258,000 cases of coronavirus have been reported in New York and more than 18,800 people have died as of Tuesday afternoon.

The duo have had a hot-and-cold relationship throughout the last few months, swinging between trading compliments and tossing verbal grenades at each other through the press. The two Queens natives have known each other for years and previously held a closed-door meeting in February on unrelated topics as the outbreak spread abroad.

Recently, Cuomo has slammed Trump's attempts to assert more authority than he actually has over how states reopen their economies from stay-at-home orders put in place to limit the spread of Covid-19. The President, in turn, has ripped governors for not doing enough to implement coronavirus testing regiments, which he says is the responsibility of the states even though governors from both sides of the aisle have criticized the federal government for failures in sending adequate testing supplies to states.

During his MSNBC interview, Cuomo said states should regulate labs and determine where tests are taken, adding that tracing is also a state function. But the federal government's role is to "make the supply chain work for manufacturers," he said.

Cuomo and Trump also spoke about the need for state government funding, and said the President seemed "very open and understanding of that" and said he would be open to that in the next round of legislation.

Asked how he approached the meeting, Cuomo said it was "just honest and open" and Trump was "communicative about his feelings."

"The tone of the conversation was very functional and effective," the governor said.

The President, Cuomo said, wanted to know what was working in New York and the challenges ahead and how the federal government could support the state's efforts. The governor said he was happy to have the USNS Comfort but it is no longer needed, and can be deployed elsewhere.

"We don't really need the Comfort anymore," Cuomo said. "... So if they need to deploy that somewhere else, they should take it."

Cuomo said that he was the one who wanted to have a face-to-face conversation.

He said he got a sense from Trump that he was "deferential to the needs" of New York and many states are in different positions -- even regions within states. But he said Trump didn't communicate any specific timeline for New York to reopen.

Later Tuesday evening, however, Cuomo previewed a new showdown with the federal government when he complained that federal officials haven't delivered on providing funding to the state, despite repeated promises.

"We'll do a financial projection in a few days that says we are going to have to make significant cuts to the budget because we were all depending on federal funding," Cuomo told reporters.

The federal government, he asserted, has repeatedly assured New York that they would receive additional funding.