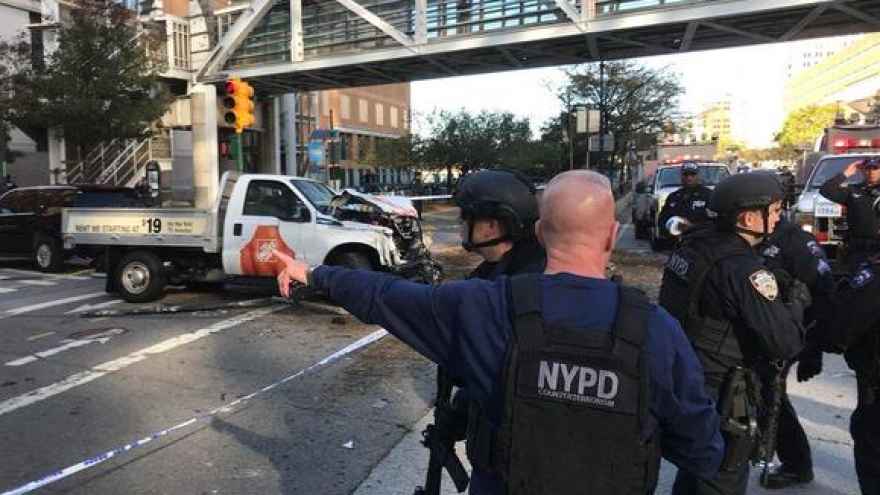 Details are emerging about the man who deliberately plowed down pedestrians in New York City in what authorities described as an act of terror. At least eight people died and at least 13 people, including the suspect, were injured.

CBS News' justice and homeland security correspondent Jeff Pegues reports from Washington that the New York attack suspect, 29-year-old Sayfullo Habibullaevic Saipov, is a truck driver and has known addresses in both New Jersey and Florida. Saipov doesn't have an extensive criminal background, Pegues reports, with CBS News only finding about four traffic tickets in his past.

An Uber spokesperson confirmed to CBS News that Saipov was a driver for them and had passed a background check. He has been banned from the app. Uber has been in contact with the FBI and law enforcement.

The FBI and NYPD are no doubt looking into Saipov's background, Pegues adds. Investigators believe Saipov, who arrived in the U.S. from Uzbekistan in 2010, was acting as a "lone wolf" and not part of a wider terror plot.

CBS News confirms from a federal law enforcement source that a note was left in the truck that was used in the attack and that it referenced the Islamic State of Iraq and Syria (ISIS).

Federal intelligence agencies will be combing through databases looking into Saipov, Pegues reports, including where he's traveled and who he's been in contact with.

Authorities will also look into Saipov's electronic devices to search for any clues that would shed light in the days and hours before the attack unfolded in lower Manhattan.

"On its face, this of course has the hallmarks of a type of attack ISIS and al Qaeda have called and that cities all across the globe have tried to guard against," Pegues says. "What will likely help police in this investigation is that the suspect survived ... but that is if the suspect cooperates."

CBS News senior national security analyst Fran Townsend says authorities have been expecting this type of attack. After the Nice attack in 2015, Townsend reports that the NYPD has reached out -- and stayed in contact with -- 148 truck rental locations to try to identify the type of individuals who might carry out this type of attack. But it's unclear where Saipov rented the truck.

Townsend reports that investigators are looking to identify Saipov's motivation and how he was inspired. Saipov came from Uzbekistan, where there is an extremist organization called the IMU, the Islamic Movement of Uzbekistan, Townsend reports. Established in 1998, IMU moved from being an affiliate of al Qaeda to ISIS in 2015, Townsend said. Both al Qaeda and ISIS have talked about car attacks.

According to Townsend, investigators will be looking into whether he was motivated by IMU or other extremist groups and if he had any contact with him -- which is one reason they will be searching Saipov's electonic devices.

In a series of tweets, President Trump said the terror attack was carried out "by a very sick and deranged person."

He also tweeted: "We must not allow ISIS to return, or enter, our country after defeating them in the Middle East and elsewhere. Enogh!"

We must not allow ISIS to return, or enter, our country after defeating them in the Middle East and elsewhere. Enough!

The White House followed with a more formal statement saying the Trump administration will "provide its full support to the New York City Police Department, including through a joint investigation with the Federal Bureau of Investigation."