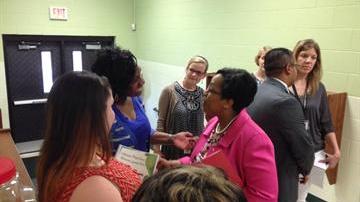 MILWAUKEE -- The Milwaukee Public Schools start over with a new acting superintendent for this school year.  Dr. Darienne Driver assumes the role after Greg Thornton bailed out of his contract for Baltimore.

Driver takes over a district trying to improve in a variety of areas. She worked under Thornton as chief innovation officer.

She says getting back into the classrooms like she did Wednesday was refreshing.

Driver acknowledged there's a lot of work ahead - including common core state standards, cultivating leadership within the district, and focusing on the students.

She says she'll work with what former Supt. Greg Thornton started and also focus more on the classroom.

We asked about some challenges like graduation rates, dropout rates and more.  She says having adult connections is important.

\"We have a number of different mentoring programs,\" Driver said.  \"The 'Be The Change' is one that's happening this summer, we have our 'I Will Not Die Young campaign'. I think for all of our students having some adult in the building and really expanding the mentoring opportunities that we have in our district are going to be mission critical to helping our students succeed.\"

Driver wouldn't say whether she wanted to continue as permanent superintendent past this year.  She said she's just focusing on this school year for now.