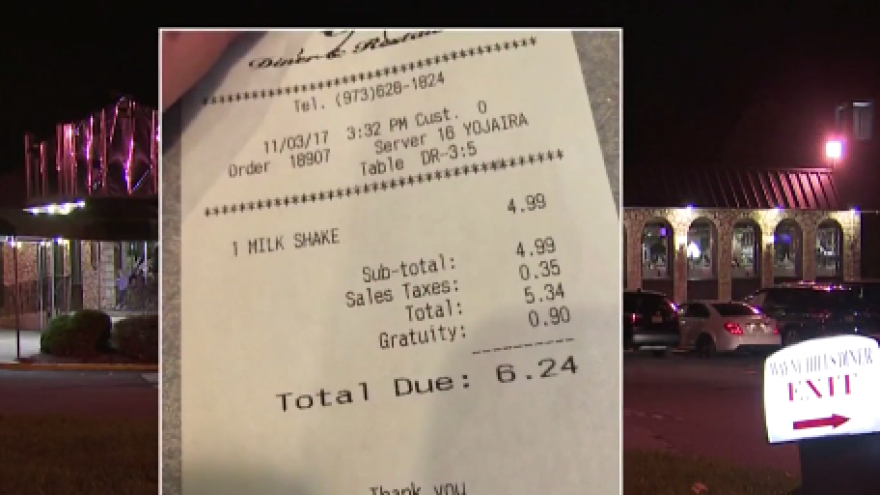 WAYNE, N.J. (CBSNewYork) — A so-called “teen-tax” has left customers at a New Jersey restaurant with a bitter taste in their mouths.

At the Wayne Hills Diner and Restaurant, the checks clearly state “gratuities are appreciated,” but one mom says for kids and teens, the tips have become mandatory.

“It’s not how much she paid, it’s the simple fact she didn’t have a choice,” Wayne mother Melissa Desch said. “So she was double-tipping the server because she didn’t realize they were adding the tip onto the bill.”

Desch and her family have been going to the diner for years, so she was disappointed and surprised when her 11-year-old daughter sent her a picture showing a 90 cent tip was unknowingly added to her milkshake.

“I got charged gratuity and my mother was there the same day and she didn’t,” Melissa’s daughter, Bella Venezian, said. Her friends got charged $1.31 and $1.58 extra.

CBS2’s Jessica Layton went to the restaurant to try and ask someone about the policy of adding gratuity for some and not others. The owner didn’t reply, and the staff referred CBS2 to their attorney, who said the kids have been showing up at the diner in groups of 20 or 30, staying for an hour or two, and the majority don’t leave a tip.

He says it’s not fair to the waiters and waitresses who earn a living based on tips, adding the menu clearly states “management reserves the right to add 18 percent gratuity.”

Melissa wonders whatever happened to tipping being optional. She says she’d like to see a consistent policy.

“Make it for everybody,” she said. “Adults, children, everything.”

The situation has left her with a bad taste in her mouth, and she won’t be stepping foot inside the diner again.