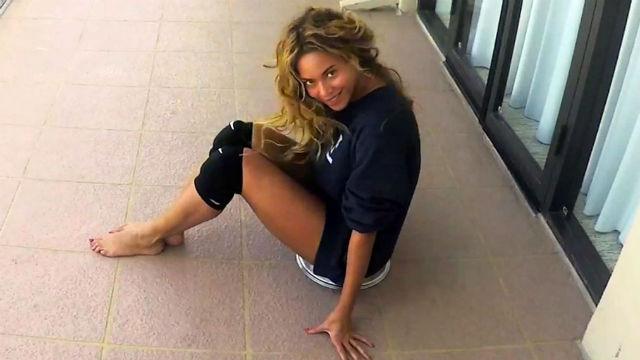 Social media is all abuzz with the latest video from the Queen B herself -- Beyonce.

It's Bey and some \"girlfriends\" prancing in and around a high-rise -- mostly in their underwear -- vamping for the camera.

It's a low-budget affair, but still scoring big with her fans.

So, what's the occasion?

Beyonce has a new album coming out on Monday, giving the video all weekend to generate interest and presumably sales.

It's really not even a new album. It's a platinum edition of 2013's \"Beyonce.\" A few extra songs and a higher price tag.

Beyonce is good at raking in the cash.

The superstar singer has topped the Forbes list of the top-earning women in music for the second in a row.

In the list released earlier this month, Beyonce earned an estimated $115 million for 2014, more than doubling 2013's $53 million, which topped last year's list.

\"Beyonce played 95 shows during our scoring period, bringing in an average $2.4 million per city,\" Forbes reports. \"She added endorsement deals from the likes of H&M and Pepsi -- plus her self-titled surprise album, which hit iTunes in December 2013 and quickly became one of the year's top sellers -- to send her income into nine-figure territory.\"

Taylor Swift came in second with $64 million in earnings. Pink ranked No. 3 with $52 million, followed by Rihanna with $48 million and Katy Perry with $40 million.

Forbes bases its list on calculating income from record and merchandise sales, touring, endorsements, publishing and other ventures, without deducting for management and/or attorney fees.

It's good to be Queen B.