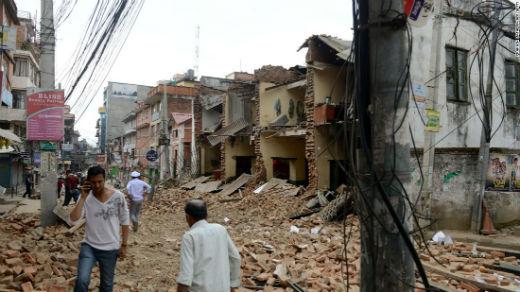 The death toll in Nepal from the earthquake that struck two days ago has risen to 3,726, Nepalese police spokesman Kamal Singh Bam said Monday.  That number is expected to rise as questions remain about the scale of the devastation in rural areas.

The destruction in Kathmandu, the capital, is stark: Revered temples reduced to rubble, people buried in the wreckage of their homes, hospitals short on medical supplies overflowing with patients. Serious damage is also reported in villages in the surrounding valley.

But farther out across Nepal's rugged landscape -- closer to the epicenter of the 7.8 magnitude quake that struck Saturday -- the situation is worryingly murky.

\"Information about remote areas is severely lacking at this time,\" said Devendra Singh Tak, an official with Save the Children in Kathmandu, noting that roads were blocked and communications unreliable.

Reports of 'total or near total destruction'

Patchy reports have filtered through of entire villages leveled by the quake or engulfed by landslides.

\"Some of the initial surveys that we're hearing of from the zones closer to the epicenter talk about total or near total destruction,\" said Jeremy Konyndyk, director of the Office of Foreign Disaster Assistance for USAID.

Tak told CNN that Save the Children and other aid groups were sending out teams Monday to more remote areas. The Nepalese government said it was flying helicopters to places it couldn't reach by road.

\"That's where one needs to get out and conduct rescue and relief,\" Tak said.

In Kathmandu, rescue workers continued to dig through the debris of flattened buildings. Occasional heartening accounts of survivors being found emerged on Sunday.

The searchers' work Monday was made easier by improved weather conditions and fewer aftershocks, which repeatedly hampered rescue efforts over the weekend. But hopes of finding many more survivors appeared to be fading as vital hours ticked by.

The number of people confirmed dead in Nepal stands at 3,432, said Nepalese Information Minister Binendra Rijal. More than 6,500 people were reported to have been injured, authorities said.

But most of those numbers are believed to have come mainly from Kathmandu and the surrounding area. They are expected to rise further as information emerges from more remote areas.

India has reported 56 deaths, and China another 20.

The earthquake and its aftershocks have turned one of the world's most scenic regions into a panorama of devastation.

\"The journey towards my family home in Sitapaila was a map of quake destruction, with many houses -- old and new -- torn apart,\" wrote freelance journalist Sunir Pandey.

\"A high wall surrounding a monastery had collapsed and the nuns had run to a nearby field,\" he wrote. \"A mud-and-brick cottage had fallen on a blue motorbike but no trace could be found of its rider. Everywhere, survivors gathered wherever they could find open space -- fields, private compounds, empty roadside lots.\"

At night, many Nepalis slept outside, shivering in the frigid air of the Himalayan Mountains but at least safe from falling debris.

\"Even people staying in hotels, they carried their blankets and pillows and were sleeping either on the ground floor or out in the open,\" Tak of Save the Children said.

Residents of Kathmandu are banding together to get by, with stores shuttered and very few sources of food and drinkable water. People have independently set up communal kitchens for cooking.

Many of the city's centuries-old buildings, which had survived countless earthquakes over the generations and provided a sense of national pride, have been toppled.

The destruction of many important temples in the heart of Kathmandu has deepened the despair many Nepalis are experiencing. Religion is an important part of life in the mainly Hindu nation.

The iconic buildings, which are often the first stop of any tourist's tour of the city, crumbled before the eyes of onlookers as the quake struck Saturday.

Police officers and volunteers continued to pick through the temples' rubble on Monday, using their bare hands, shovels and pieces of metal. They shunned the use of heavier gear to dig through the wreckage for fear of harming any survivors, bodies or priceless artifacts buried within.

Tourism has been one of the few economic bright spots in Nepal, one of the poorest nations in the world. But now that industry is threatened after the earthquake, which set off deadly avalanches on Mount Everest, the country's most famous attraction.

Three of the dead are U.S. citizens, a State Department official told CNN on Sunday, while offering \"deepest condolences to the family and friends of the victims.\" The State Department didn't provide any names, but we've learned them.

Google executive Dan Fredinburg was one of the Americans. According to an Instagram post by his sister on his account, an avalanche killed Fredinburg on Mount Everest.

Eve Girawong of New Jersey also was killed by an avalanche on Everest, according to Madison Mountaineering, the Seattle-based company that led her expedition. Girawong was at the Everest base camp when she was swept away to her death.

Tom Taplin, a filmmaker from Santa Monica, California, was making a documentary on Everest climbers, when wind stirred by the avalanche caused him to take a fall, CNN affiliate KABC reported.

Humanitarian workers say medical supplies are reported to be in short supply at the overcrowded hospitals in Kathmandu. Doctors are appealing for help.

International efforts are well underway to send aid into Nepal, but it was unclear whether enough was trickling through to the places that needed it most.

Some aid flights were delayed Sunday after the big aftershock that hit Nepal. The country's mountainous terrain makes it harder to move supplies far beyond the capital.

A CNN team at Kathmandu's main airport on Monday saw large numbers of cargo planes on the tarmac, but also witnessed chaotic scenes as officials struggled to cope with the influx of aid and the large numbers of people trying get out of the country.

The airport was also facing some of the shortages afflicting the disaster-hit nation.

\"Even at the airport in Kathmandu, there is no drinking water or food or other provisions available, so one can imagine what might be happening in other parts of the country,\" said Tak of Save the Children.