Neighbor Credited With Saving Dog's Life After Breaking Through Ice 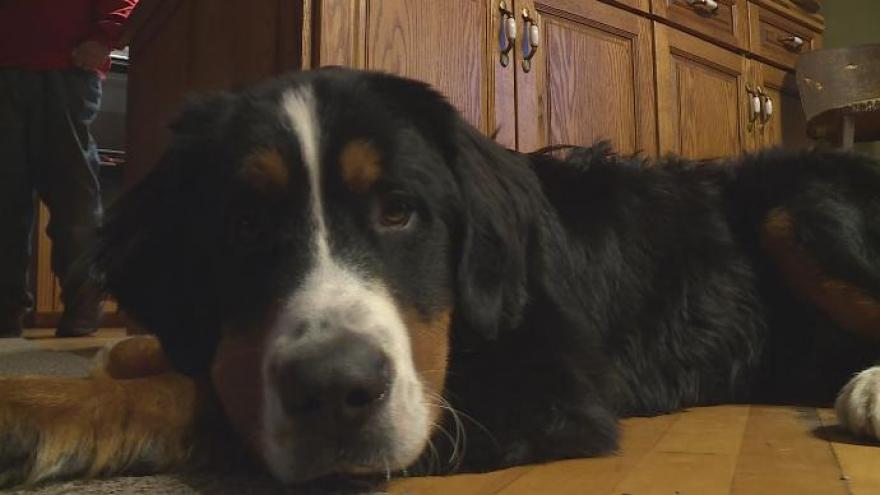 TOMAHAWK, Wis., (WSAW) -- Terry Collins, Jr. is being called a hero by his neighbors after rescuing their Bernese Mountain Dog puppy from an icy river in Tomahawk, Wisconsin.

It had already been a tough day for the Rutens. They woke up to discover their oldest Bernese Mountain Dog had died in his sleep after a battle with cancer. Then, their 10-month-old puppy, Waldo, went missing.

"I called his name, which he normally responds to rather quickly," owner Susie Ruten said.

Ruten was unpacking groceries and became worried, so she went outside to try and find Waldo.

When she found him, he was struggling to keep afloat in a broken up part of the icy river that runs through the Ruten's backyard.

"He was trying to get himself up and out of the water," Ruten said.

Panicked, she and her husband called the police, and their friend and neighbor, Terry Collins, Jr.

"I hopped in my truck, left work and came here and pulled into the driveway, police were already here," Collins said.

Police said the puppy had already been in the water for 20 minutes when they arrived on scene.

Collins thought quickly and came up with a way to safely rescue the dog.

He grabbed some plywood and headed to the ice.

"I got about 10 feet from the dog, threw the boards down, crouched down, grabbed him by his front legs and pulled him out," Collins said.

He didn't have to think twice before trying to rescue Waldo.

"They just had their oldest dog die that morning, and I didn't want to let another one pass away," Collins said.

After being pulled out of the ice, Waldo took a few steps before collapsing. The Rutens rushed Waldo to the veterinarian where the puppy was treated for hypothermia and sent home.

Less than 24 hours later, Waldo is back to being a regular puppy.

"He's jumping around and spry and back to his regular self," Ruten said.

Both Collins and Rutens think that Waldo may have wandered out on the ice while looking for the Ruten's older dog, Walter, who passed away earlier that morning.

The Wisconsin Department of Natural Resources says there's no guarantee that ice is safe to walk on. If you're going on the ice, dress in layers, don't go alone, avoid inlets and outlets and know that the current can thin the ice. Also, look for clear ice, which is generally stronger.

Read the original version of this article at wsaw.com.