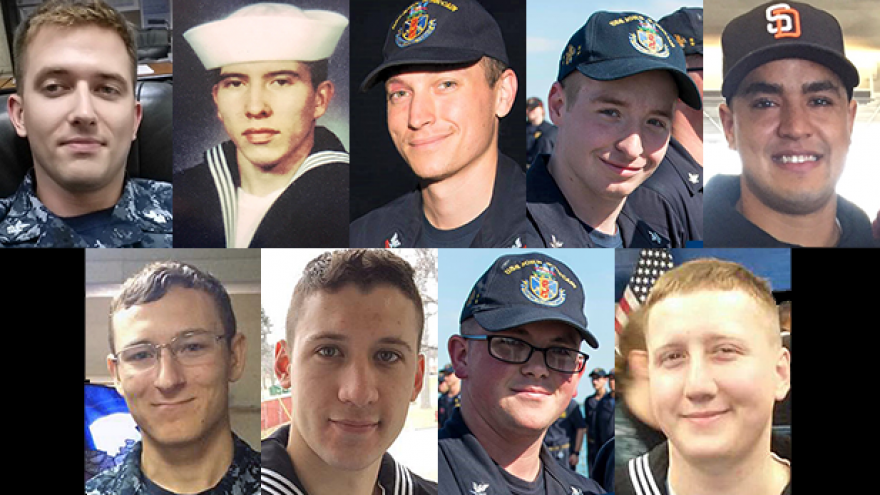 NEW YORK -- The U.S. Navy has identified the sailor who was killed and nine more who remain missing following the collision of the USS John S. McCain with a merchant vessel in the Pacific.

The Navy's 7th Fleet said Thursday the search and rescue mission in the surrounding waters for the missing sailors has been suspended as divers continue to search the ship.

The collision occurred on Monday, Aug. 21, in the waters east of Singapore. The McCain collided with a 30,000-ton oil and chemical tanker and left a gaping hole in the side of the missile destroyer, flooding compartments in the lower levels of the ship.

In a statement on Thursday, the Navy said Electronics Technician 3rd Class Kenneth Aaron Smith died in the incident. Divers from the Navy and Marine Corps recovered his remains during their search of the ship.

Smith was 22 years old and from New Jersey, the Navy said. His mother, April Brandon, told CBS News on Tuesday that Smith was "a great kid" who was one of many family members to serve in the Navy.

Search efforts across a 2,100-square-mile area of ocean have been suspended as divers continue to search the vessel for the remaining nine missing sailors. According to the Navy, those who remain missing are:

The head of the Navy's 7th Fleet, three-star Vice Adm. Joseph Aucoin, was dismissed on Wednesday. The commander of the Pacific Fleet, Adm. Scott Swift, fired Aucoin "due to a loss of confidence in his ability to command." Ships from the 7th Fleet have been involved in four accidents since January, including two which resulted in sailors being killed or going missing.

In June, seven sailors drowned after the USS Fitzgerald ran into a container shipoff the coast of Japan. The captain of the Fitzgerald, two officers and a dozen sailors were disciplined for that crash.

In the hours after the McCain incident, the chief of U.S. Naval operations issued a rare order for all Navy ships to halt operations and review training protocols.

The Navy said Thursday that the investigation into the deadly crash is continuing.