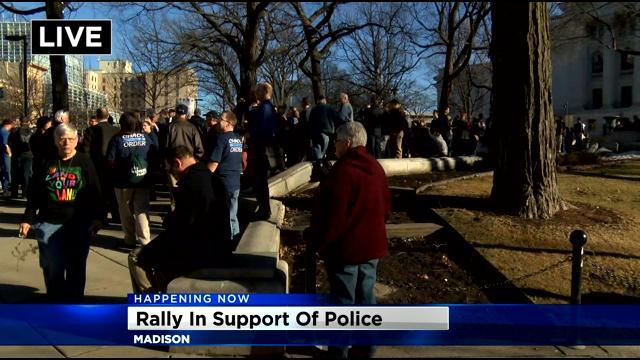 Groups from Milwaukee and across the state gathered in Madison Wednesday for a series of events in the wake of last Friday's deadly police-involved shooting. Rallies will be held for both the teenage suspect who was killed, and the officer who shot him.

There have been daily rallies and protests since Tony Robinson was shot and killed by Madison Police officer Matt Kenny Friday. A Justice4Tony rally started at Worthington Park in Madison at 3:00. The group marched to the Department of Corrections office in Madison.

They hope to show through their demonstration that there's systematic problems with the criminal justice system in Dane County and across the country.

The rally is being led by a group called Young, Gifted, and Black. They'll be joined by Wisconsin Jobs Now, and Youth Empowered in the Struggle. The Coalition for Justice - a Milwaukee based group - that led many of the rallies to support Dontre Hamilton will be there too.

\"We're unified for justice and justice is many different things,\" organizer Matthew Braunginn told CBS 58's Madison Bureau reporter David Ade. \"We're unified on breaking through state oppression... We're unified for making so black lives can be fully integrated into the society were in instead of being second class citizens.\"

There's also a gathering that started at 5 p.m. to support the officer in this case , Matt Kenny.  His supporters gathered at he Law Enforcement Memorial near the State Capitol.