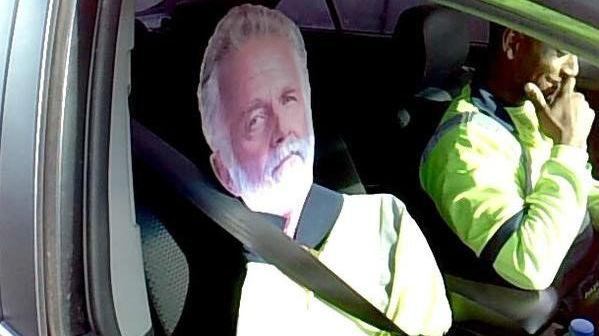 (CNN) -- Call it \"The Most Interesting Traffic Ticket in the World.\"

A Washington state trooper caught a driver using a cardboard cutout of Jonathan Goldsmith, the Dos Equis beer pitchman known as \"The Most Interesting Man in the World.\" The driver, who was by himself, was attempting to use the HOV lane.

\"The trooper immediately recognized it was a prop and not a passenger,\" Trooper Guy Gill told the New York Daily News. \"As the trooper approached, the driver was actually laughing.\"

Gill sent out a tweet with a photo of the cutout -- who was clad in what looked like a knit shirt, a far cry from his usual attire -- and the unnamed laughing passenger: \"I don't always violate the HOV lane law...but when I do, I get a $124 ticket! We'll give him an A for creativity!\"

The driver was caught on Interstate 5 near Fife, Washington, just outside Tacoma.

\"He could have picked a less recognizable face to put on his prop,\" Gill told the Daily News. \"We see that a lot. Usually it's a sleeping bag. This was very creative.\"