More than half the nation's governors say Syrian refugees not welcome 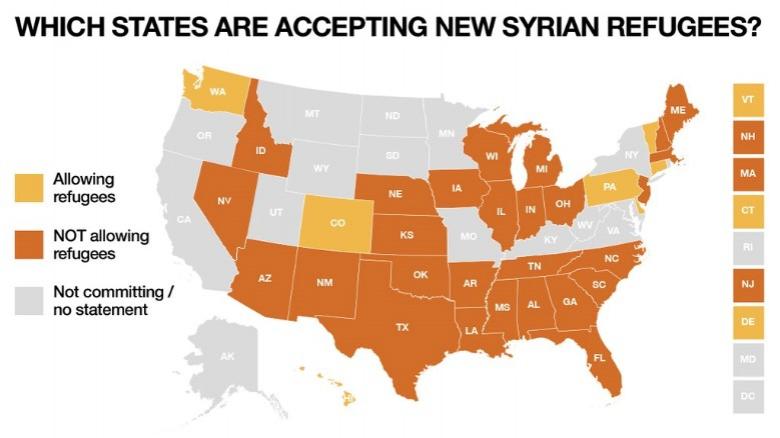 (CNN)More than half the nation's governors -- 27 states -- say they oppose letting Syrian refugees into their states, although the final say on this contentious immigration issue will fall to the federal government.

States protesting the admission of refugees range from Alabama and Georgia, to Texas and Arizona, to Michigan and Illinois, to Maine and New Hampshire. Among these 27 states, all but one have Republican governors.

The announcements came after authorities revealed that at least one of the suspects believed to be involved in the Paris terrorist attacks entered Europe among the current wave of Syrian refugees. He had falsely identified himself as a Syrian named Ahmad al Muhammad and was allowed to enter Greece in early October.

Some leaders say they either oppose taking in any Syrian refugees being relocated as part of a national program or asked that they be particularly scrutinized as potential security threats.

Only 1,500 Syrian refugees have been accepted into the United States since 2011, but the Obama administration announced in September that 10,000 Syrians will be allowed entry next year.

The Council on American-Islamic Relations said Monday, "Defeating ISIS involves projecting American ideals to the world. Governors who reject those fleeing war and persecution abandon our ideals and instead project our fears to the world."

Authority over admitting refugees to the country, though, rests with the federal government -- not with the states -- though individual states can make the acceptance process much more difficult, experts said.

American University law professor Stephen I. Vladeck put it this way: "Legally, states have no authority to do anything because the question of who should be allowed in this country is one that the Constitution commits to the federal government." But Vladeck noted that without the state's participation, the federal government would have a much more arduous task.

"So a state can't say it is legally objecting, but it can refuse to cooperate, which makes thing much more difficult."

Is shunning refugees the answer to terror?

Kevin Appleby, director of migration policy at the U.S. Conference of Catholic Bishops, said one tactic states could use would be to cut their own funding in areas such as resettling refugees. The conference is the largest refugee resettlement organization in the country.

But "when push comes to shove, the federal government has both the plenary power and the power of the 1980 Refugee Act to place refugees anywhere in the country," Appleby said.

More than 250,000 people have died since the violence broke out in Syria in 2011, and at least 11 million people in the country of 22 million have fled their homes. Syrians are now the world's largest refugee population, according to the United Nations. Most are struggling to find safe haven in Europe.States whose governors oppose Syrian refugees coming in:

States whose governors say they will accept refugees: