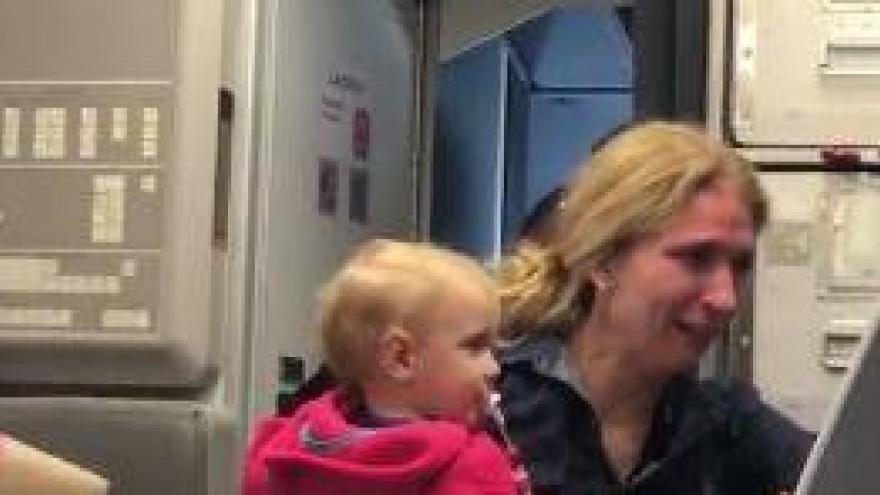 American Airlines is investigating after a video surfaced on social media showing a confrontation between a passenger and a flight attendant aboard one of its flights.

The video, filmed by another passenger Friday, appears to be the aftermath of an incident during boarding of a flight from San Francisco to Dallas. It does not show what happened beforehand.

The incident comes two weeks after a United Airlines passenger was dragged from his seat and off a plane by Chicago aviation police. United was widely criticized on social media and by industry professionals for the conflicting statements it put out afterward, initially siding with its employees and appearing to blame the passenger.

Flight attendant: 'Hit me, hit me'

The video of the American Airlines encounter starts off with a woman sobbing as she holds a baby.

\"Just give me back my stroller please,\" she says tearfully.

A male passenger stands up and intervenes, apparently upset with how the woman's situation was handled. He tells the flight attendant, \"Hey bud, hey bud. You do that to me, and I'll knock you flat.\"

The flight attendant tells the male passenger to stay out of it, then later taunts him to \"hit me, hit me ... bring it on.\"

From the video, it's unclear why the woman is distraught. Surain Adyanthaya, who posted the video to Facebook on Friday, said that before the footage, the flight attendant had \"violently\" taken the stroller, hitting the woman in the process and narrowly missing her baby.

Adyanthaya later posted the airline had \"escorted the mother and her kids off the flight\" and let the flight attendant back on.

'You almost hit that baby!'

Olivia Morgan was waiting to board when the incident happened, according to a report by CNN affiliate KTLA-TV in Los Angeles.

\"The flight attendant wrestled the stroller away from the woman, who was sobbing, holding one baby with the second baby in a car seat on the ground next to her,\" Morgan told the TV station.

\"He stormed by me with the stroller and I said something like, 'What are you doing? You almost hit that baby!' And he yelled at me to 'stay out of it!' just like he does in the video.\"

American says on its website that a customer can carry a small collapsible stroller, but it must be checked at the gate. Bigger strollers must be checked in at the ticket counter, the site says.

The airline quickly responded to the incident, which occurred when the flight was about to take off.

\"We have seen the video and have already started an investigation to obtain the facts. What we see on this video does not reflect our values or how we care for our customers,\" it said in a statement.

\"We are deeply sorry for the pain we have caused this passenger and her family and to any other customers affected by the incident.\"

American said it upgraded the woman to first class for the rest of her trip and the attendant has been \"removed from duty\" as it investigates.

\"The actions of our team member captured here do not appear to reflect patience or empathy, two values necessary for customer care. In short, we are disappointed by these actions,\" the airline said.

In the United incident, passenger David Dao suffered a concussion, a broken nose and lost two teeth, and plans to sue, according to his attorney.

The airline later apologized for the forcible removal of Dao, a 69-year-old physician, and offered compensation to those on the flight.