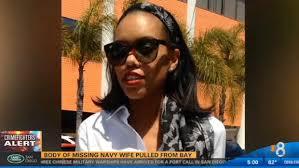 (CBSNews) SAN DIEGO -- Officials have identified a body pulled from the San Diego bay two months ago as Elizabeth Sullivan, a 31-year-old Navy wife and mother of two who had vanished two years before from her Point Loma home, reports CBS San Diego.

Police say they believe the woman was a murder victim, but are releasing few details.

Sullivan’s body was found in the water Oct. 6, and homicide detectives have since launched an investigation into her death, San Diego police say. Police have notified Sullivan’s husband and family.

Sullivan went missing on the night of Oct. 13, 2014, and was last heard from via text. Her phone was later shut off. San Diego police’s missing persons unit investigated, but weren’t able to locate her.

In the years since, her family has reportedly hired a private investigator and used social media and fliers to spread the word about her disappearance. But in an October 2015 statement, they said the investigator had no leads and the case had gone “completely cold.”

The body was reportedly severely decomposed and it took several months to identify the remains. The body was found just a few blocks from Sullivan’s home.

Police have not released a cause of death or why they suspect the woman was murdered, the station reports.

“Our goal is to solve this case, and it’s only a small part in our effort to figure out what happened, but being able to (tell the family) — at least there’s a bit of closure,” said San Diego police Lt. Mike Holden told the San Diego Union Tribune.