Mini-van lodged underneath huge beam on Watertown Plank Rd. near US 45NEAR 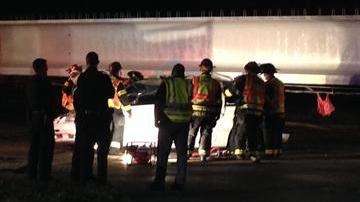 MILWAUKEE-Emergency crews rescued a person from a mini-van Tuesday night that was lodged underneath what appeared to be a huge bridge support beam.

The bizarre accident happened around 7 p.m. on Watertown Plank Road near US 45.

Emergency crews on scene were able to free the victim. They tell CBS 58's Bill Walsh that the victim's injuries are not life threatening.

Three trucks were transporting massive beams to the Swan Bridge project with an escort by the State Patrol.

Somehow the driver didn't see the beam and according to the preliminary investigation, barreled into it.