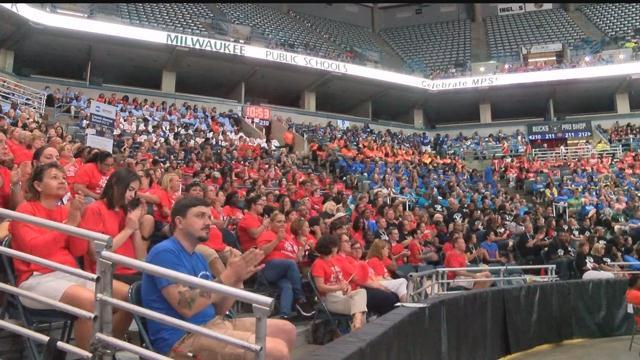 MPS students return to the classroom on Thursday, but teachers are getting fired up for the new school year today.

It's a 'back to school' rally so big it's being held at the BMO Harris Bradley Center.

Thousands of teachers from across the city were there Monday morning for a major pep rally to say they were all MPS proud.

This is the second year MPS teachers have kicked off the school year with a pep rally.

There was a rollcall where every school was named.

They were also drum line teams and cheerleaders from four different high schools.

Superintendent Dr. Darienne Driver along with MPS Board President Mark Sain were some of the speakers laying down the groundwork for the school year.

He touched on the poverty and public safety issues both the city and teachers face every day and thanked them for that.

But it was high school student who moved to the US for years ago from Uganda and didn't speak a word of English that stole the show. She told the crowd how much she appreciates all teachers do.