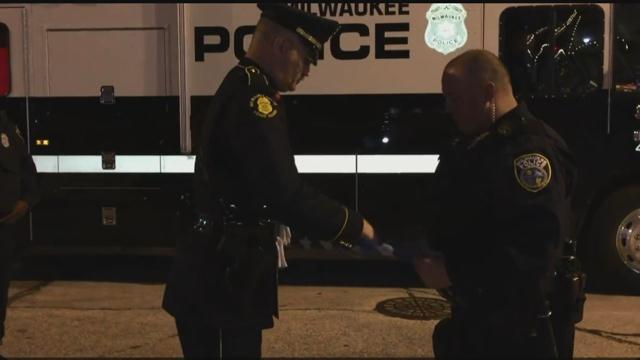 Milwaukee Police believe they know who set fire to an American flag during protests last night.

Police Chief Edward Flynn said they will be pursuing charges against the protester. Not because he was burning the flag, which is protected by free speech. Instead it would be because he started a fire in the middle of a crowded area.

The suspect has not been named yet.

As the district office awaits to review the evidence from investigators.

Police said the man who started the fire was not a part of the main protest, and instead was on the fringe of it.

"This particular character tends to cause trouble every time he goes to a demonstration. Good for him. But the point is we protected his right to be a jackass and we will continue to protect everybody's rights to free speech," said Chief Flynn.

Officers with a fire extinguisher had to rush over to the spot near 4th and Kilbourn outside of the debate to put out the flames.

Officer Joel Rossman was already in his dress uniform.

Having been part of the debate's color guard earlier in the evening.

Police Chief Edward Flynn said it was only appropriate that he joined two other officers. They folded the flag that had been doused with gasoline.

The flag is being kept as evidence as the investigation moves forward.

Setting fire to the flag is protected by free speech authorities asked for charges.

Social media exploded in Milwaukee over the treatment of the flag.

Milwaukee Police said they've never had a greater reach online than with the video of the folding the flag.

“I would assert setting fire to something in the middle of a crowd of people is an inherently dangerous act. We will bring those charges forward. They will be carefully evaluated by the D.A.'s office," said Chief Flynn.

Word spread, State Senator Lena Taylor, a Democrat, posted multiple pictures including a photo of people with the flag.

Social media users suggested she had endorsed the act.

Taylor said she received a lot of online hate messages.

She explained the posting by saying she was just trying to document the protest.