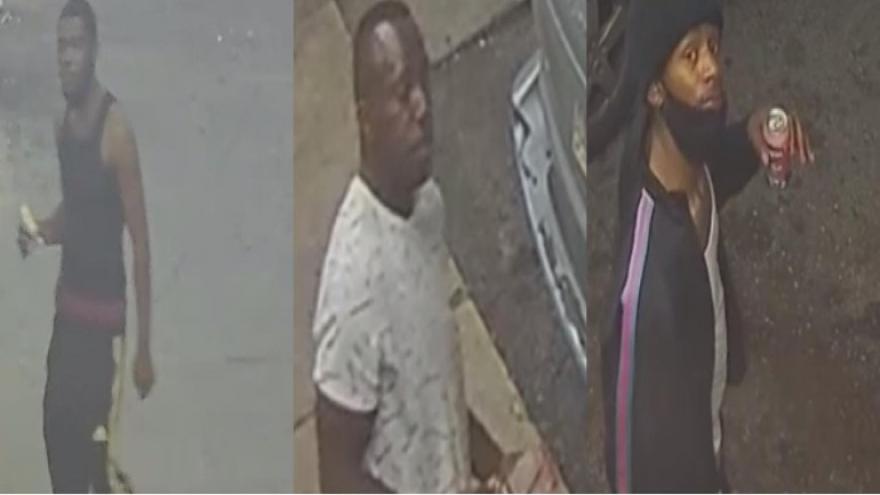 MILWAUKEE (CBS 58) -- Milwaukee police are requesting the public's assistance in identifying and locating three suspects wanted for an armed robbery and car jacking that occurred around 9:45 p.m. near West Silver Spring and 64th on Wednesday, July 1.

Officials say suspect #1 was armed with a gun demanded and obtained property alongside the other suspects who approached the victim. The suspects then fled in the victim's vehicle.

Suspect #1 is describe as an African-American male, 23-28 years of age, 5'10 tall, 160-170 pounds with short hair. He was last seen wearing a black mask, black tank top, black pants with stripes on the sides, and black and white shoes. He was armed with a gun.

Suspect #2 is described as an African-American male, 23-28 years of age, 6’00” tall and 165 pounds. He was last seen wearing a black mask, black knit hat, a black sweatshirt with stripes on the sleeves, black pants, and blue or purple shoes.

Suspect #3 is described as an African-American male, 23-28 years of age, 5’07” tall, 150-160 pounds and had short hair. He was last seen wearing a white t-shirt with black designs, black pants, and red, white and blue sandals with white socks.

The stolen vehicle is described as a gold 2005 Dodge Caravan.

If you have any information regarding this incident, please call the Milwaukee Police Department at (414) 935-7360, or call Milwaukee Crime Stoppers at (414) 224-TIPS or P3 Tips App.