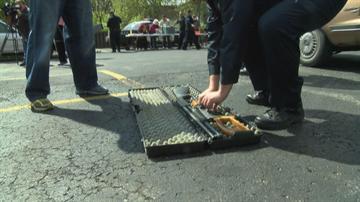 MILWAUKEE -- Opening cases filled with rifles, shotguns and pistols Saturday, Milwaukee Police collected weapons that could be used to kill.

Darrel Tate used to live in the neighborhood and brought by a weapon.

\"It was a family member's gun and it's been in my attic for so long,\" Tate said.  He hopes dropping off a gun will save at least one life.

\"People, kids find weapons and they're curious,\" Tate said.  \"Then all the sudden, bam, they get shot.\"

Hundreds of others joined Tate, pulling up in cars and walking by, exchanging weapons for pre-loaded debit cards.

\"We've tried to hit this issue on every front,\" Mayor Tom Barrett said.

Barrett first organized the \"Ceasefire Week\" ten years ago.  This year, church leaders and businesses approached him about a gun buyback.

The city collected any unloaded weapon -- no questions asked-- but most guns were older models.

\"Individuals who are linked to criminal activity prefer to have newer guns,\" Dr. Stephen Hargarten with the Medical College of Wisconsin said.

Dr. Hargarten has studied gun buybacks for decades.  He thinks a narrowed approach would work better.

The doctor believes Milwaukee can cut back on violence, saying Saturday's buyback was a good first step, but it can't be the last.

\"Leaders of civil society coming together, not for one week, but 52 weeks,\" Hargarten said.

\"We are just going to keep our foot on the accelerator,\" Mayor Barrett said.

The mayor's office noted the city collected 353 guns Saturday -- 234 were handguns, 115 were rifles and four were assault weapons.  Some of the $53,000 in debit cards were left over.  The mayor says the city may consider another gun buyback later this year.