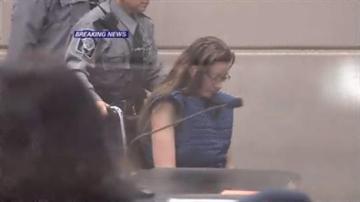 According to the criminal complaint, Zylstra and her ex-fiance Lucas Fisher were separated. Fisher moved out of the home he shared with Zylstra and his son Leonidas Fisher during February of 2014. Fisher told police he visited his son on March 8th, during that visit Zylstra allegedly asked him to come back home and work things out. Zylstra says she told Fisher she didn't want her son to come from a broken home. Fisher told Zylstra he was not interested in moving back in with her.

The criminal complaint says Zylstra took several prescription drugs throughout the evening of March 8th while she wrote goodbye letters to her mother, brother, and Lucas Fisher. Zylstra said she took more prescription drugs around 2:00 a.m. hoping it would give her courage to kill herself.

Zylstra told police she didn't want Leonidas to suffer and die in his sleep. She allegedly placed a beige blanket over Leonidas' face, and pressed a pillow over the blanket. After Leonidas died, Zylstra attempted to kill herself by putting a toaster inside a bathtub.

Lucas Fisher told police Zylstra sent him a text message around 5:30 a.m. on March 9th. Fisher says he called police asking for a welfare check on Zylstra's home on the south side of Milwaukee. Police say they found a deceased Leonidas in his crib, and Zylstra laying in her bed.

If convicted, Zylstra will face up to life in prison.