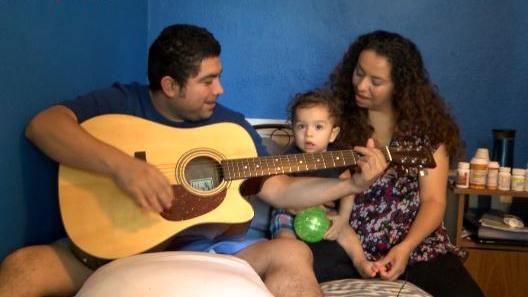 A month after a 35-year-old man survived getting shot outside of his home on the South Side of Milwaukee, he's still hurting physically and financially.

On June 2015, Mario Ibanez returned home from buying groceries with his pregnant wife and one-year-old son. As soon as they pulled in the driveway, he saw three men walking up to him with a gun.

\"I panicked,\" Ibanez said about the moment that one of the men pointed a gun to his face to try to steal his car.

\"The problem is not the car... because I have insurance. I worry for my baby and my wife,\" Ibanez said.

Instead of handing his keys, Ibanez went into defense mode and tried to grab the gun. That's when he was shot twice, once with a grace wound, while the other bullet broke his femur in half.

Milwaukee police say four people involved in the shooting are now in custody, but are awaiting charges.

Ibanez in the meantime, is struggling with pain. He lost his job because he can't walk on his own yet. While the bills, including medical costs, are piling up.

\"This is so difficult for me and my family because my wife is pregnant,\" Ibanez said.

The family has set up a GoFundMe page to obtain help to cover the medical costs. For more information, click here.