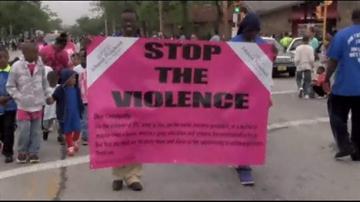 MILWAUKEE-They were already on their feet for the annual Juneteenth Parade, but there was rousing applause when banners calling for an end to violence passed by.

Repeated messages for peace along MLK in Milwaukee for the march.

Religious groups joined in the mix with school bands and drill teams with the very young walking hand in hand.

Lifelong residents say as a tribute to the legacy  of  those who came before them, there must be a promise to prosper and support each other in the future.

\"I come to everyone,\" Rose Curlee said of the parade. \"I've been doing it since I was a little girl. So it's very important to me.\"

Juneteenth commemorates the announcement of the abolition of slavery that reached salves in Texas five months after President Lincoln sing the Emancipation Proclamation.