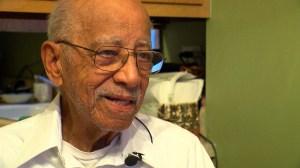 MINNEAPOLIS (WCCO) — A Twin Cities great-grandfather is getting a lot of attention for a video showing him shoveling his neighbor’s sidewalk.

The 101-year-old has learned a thing or two about work ethic over his long life. After his father died when he was four, he took care of work around the house to help his single mom. Snow shoveling was one of his duties.

“I was the only boy, and it was an automatic thing for me to more or less do ‘a man’s job,'” Mann said.

The job never got him much attention until now, nearly a century later. A video showing Mann shoveling his neighbor’s snow has gone viral. His neighbor is overheard in the video summing the situation up perfectly.

“This is an inspiration to a lot of people to get up, get out and get something,” Mann’s neighbor said.

The video had more than 343,000 views on Facebook as of Wednesday evening.

Mann says he was just doing his neighbor a favor and not expecting anything in return, just as he was taught growing up.

“That’s why I think people appreciated seeing the video of him because there are so many things going on that are not, you know, people are not being kind to each other,” Margo Mann, Richard Mann’s daughter, said. “And kindness is the key to having a successful and good life.”

Mann is a father, grandfather and great-grandfather. He lost his first wife to cancer, and his second wife to Alzheimer’s disease.

When asked the key to a long life, it appeared that his sense of humor is also still going strong.

Mann says he still plays golf whenever he gets the chance, and swears by bacon and eggs for breakfast every day.