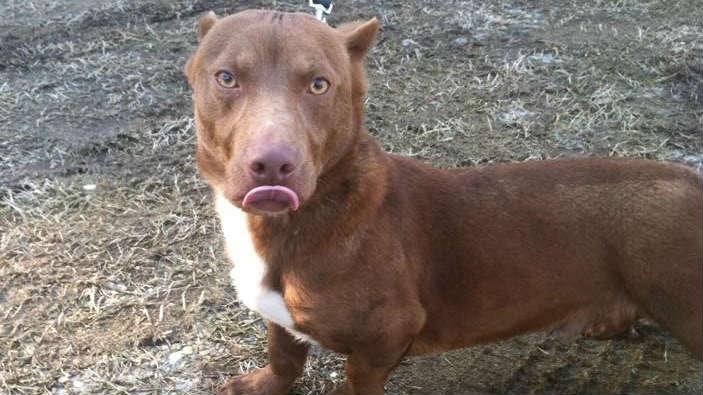 (CNN) -- What if a dachshund and a pit bull got together?

That's the way the joke would open, pairing the most unlikely of canine partners -- the short legged, long bodied dachshund with the larger, stronger pit bull.

But Rami is proof that the match has happened.

\"It is a true pit bull head on a dachshund body,\" said Dawn Blanton of the Moultrie-Colquitt County Humane Society in south Georgia.

A man found the dog, now named Rami, wandering in his backyard. He called the shelter and described him as a \"pit bull with short legs,\" Blanton told CNN affiliate WALB.

\"Hi! I'm Rami and I'm looking for my forever home. I'm full of energy. I don't like walking on a leash,\" reads a posting on the animal shelter's Facebook page.

\" I'm a sweetie pie, and love to run. I don't listen very well, so you'll need to take some time to train me. Because I tend to be a bit hyper, I might not be the best addition to a household with little kids. But I'm sure that all I need is a little lovin.\"

And with that posting and others, Rami has become a social media sensation.

\"We posted a photo of him when he became available. And within a day it went to 1 million hits. And by that night it was up to 2 million. And now it is over 2.4 million hits,\" Blanton said.

Humane society workers are taking their time to pick his new owner because they don't want him to become a freak show.

\"It will be a pretty tough test for people that are wanting this dog. They're going to have to answer questions, we're going to do follow-up inspections on him,\" said Don Flowers, also of the Humane Society.

The Humane Society is hoping Rami's newfound star status will bring attention to other animals on the county's Facebook page -- there are dogs Brutus and Oreo, as well as Loki and Mari the cats, along with others.

Rami, who is fully grown at 25 pounds, is neutered. He is expected to be adopted by next week.