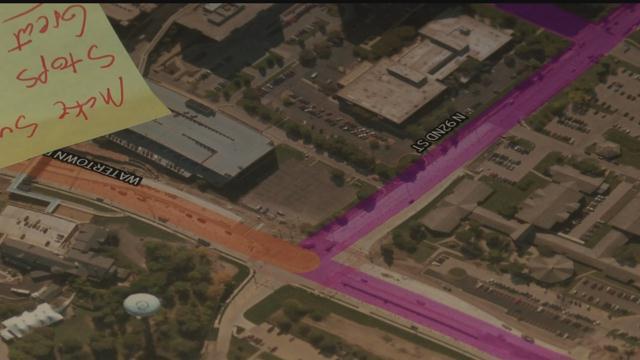 It could get you from downtown Milwaukee to Wauwatosa quicker than ever.

A new proposal would bring in new buses and bus lanes to Milwaukee county.

Its still in the very early planning stages but MCTS tells us the route would be a benefit to all, connecting residents to more employment and entertainment but not everyone is on board.

New  buses traveling to and from downtown and Wauwatosa that ride in their own specific lanes, stop less frequently a nd even control traffic.

"Sometimes when they're getting to a green light there's technology that allows the green light to stay green for five more seconds so they can get through," said Brendan Conway from MCTS.

You can do this right now on a bus, but not as fast and it can happen with little change to existing streets and neighborhoods.

"This isn't like a light rail where you have to dig in the ground; there sometimes can be very little construction," said Conway.

However, in some areas, a lane of traffic would be taken away from drivers.

Downtown resident Mike Glaber is all for the proposed BRT.

"I think a lot of people would buy houses in my neighborhood and settle there," he said.

But Mary Glass says the route is all wrong.

"They're not connecting the other part of Milwaukee; that's the part that is enduring concentrated poverty, and has transit issues," she said.

And while Alderman Bob Bauman says hes for it, he's concerned its being done "on the cheap."

"Its very expensive on the operating cost side and that's where Milwaukee has a huge challenge," he said.

But  Conway tells us with grant money and other money already set aside, this BRT route may have more benefits than people realize.

"You don't need to have as many buses on Wisconsin if you have BRT so instead those buses could be redirected and provide better service," he said.

The county is applying for a federal grant in August; and will pay for at least 20 percent of the project. Meanwhile, if this does end up coming together, you still wouldn't see the BRT line until 2019.