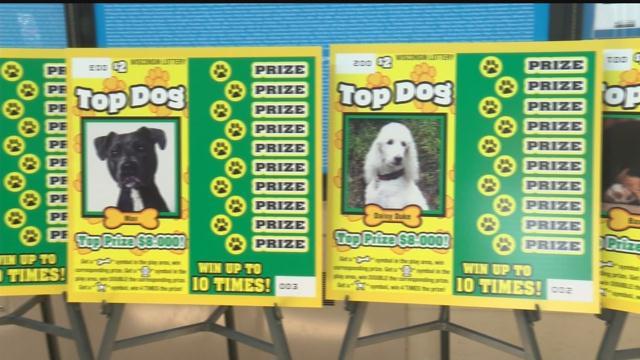 The Wisconsin Lottery picked five canines that will star on the new Top Dog instant scratch tickets game that began in August.

The Lottery received 2,375 submissions with the public casting votes for the five winners.

They are Baxter from Hartford, Willy from Waterford, Daisy Duke from Cedarburg, Max from Glendale and AnnaBelle from Racine.

Max and his owner will be special lives guests on the CBS 58 News at 4 p.m. on Friday.

The owners received a $100 VISA gift card, a framed sample Lottery ticket featuring their pet, and $20 worth of Top Dog instant scratch tickets.

As part of the contest, the Lottery will be making a $1,000 donation to the Wisconsin Humane Society, which is the state's larger shelter.

Hank the Ballpark Pup made a special appearance to congratulate the winners at the Wisconsin Humane Society for the ticket launch which also served as a donation drive for the animals being treated and waiting for adoption there.