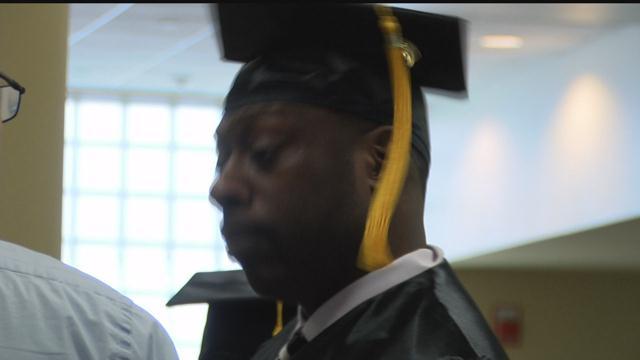 He went from selling drugs to support his family, to jail, to now being a high school graduate. Anthony Warden was one of more than 200 people who were given their GED's at the downtown campus of MATC Wednesday. Each of the 200 graduates has a story that's significant to them, and Warden wanted you to hear his and what he's now doing to better the community. The moment when Warden crossed the stage holding his diploma was 23 years in the making.

"Pride, joy. It's something that my mom would look forward to," Warden said.

A lot has happened in that 23-years. In 1993, Warden dropped out of high school after his brother was killed and his mother was shot and almost paralyzed. Desperate to make money, he started selling drugs, but that landed him in jail for three years.

"I mean, it was like, it's either that or lose my family. I couldn't have that, so, I did whatever I had to do," he added.

Once Warden got out, he made a change for the better. The now musician has a record label and, with his pastor, uses the profits to help keep teens on the straight and narrow.

"Give them something better to do, give them a reputation. We try to help them learn more, play basketball, take them to centers. We're opening up a new club for the teenagers to go to," Warden said.

Now, Warden is able to celebrate having a high school GED.

"I'm showing my children that it's never too late for you to do anything," he said.

Warden returning to MATC in August to study audio production.