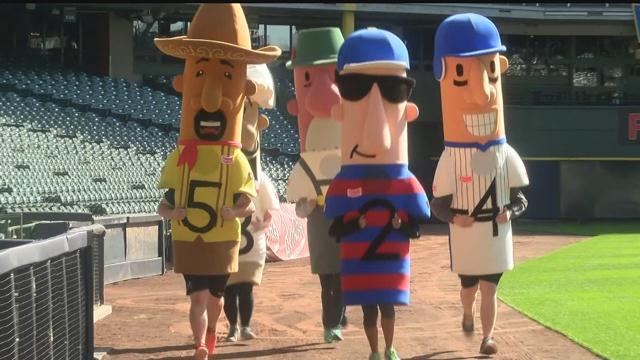 The countdown is on. We are less than a week away from the Brewers home opener against the San Francisco Giants.  All week long the team is giving us an inside look into their upcoming season.  Tuesday we found out the players are not the only ones preparing for the season.

Bernie Brewer took his first ride down the slide for the year on Tuesday morning.

Also warming up ahead of the season, the Klement’s racing sausages had a little friendly competition. They ran down the third-base line towards CBS 58’s cameras.

Barrel man also began practicing Tuesday. He had his first rehearsal in front of the media for his seventh inning stretch dance routine.

In all seriousness, there is lots of entertainment planned for the Brewers this year.

There are two concerts that will happen during the season. There will also be several theme nights and new interactions for fans on the giant screen

Aleta Mercer, the Vice President of Entertainment and Broadcasting for the Brewers, says the mascots and extra entertainment are an important experience for fans.

"They are exciting it's fun to watch them. And just to get into all the enthusiasm that they given bring to the game it's a good thing," Mercer explained.