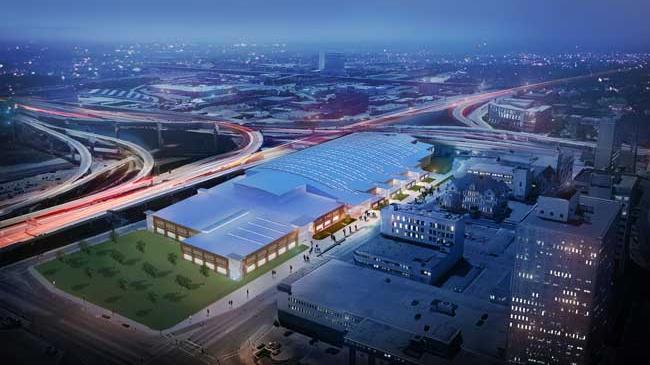 The announcement was made in his second Presidential Address.

The center will serve as a national destination for scientific research in human performance.

“This signature project represents a truly extraordinary opportunity to transform our region, and we couldn’t be more excited to partner with Aurora Health Care,” Lovell said. “This center will become a unique destination and national model that spurs innovative research and significantly advances our missions.”

Aurora will be making a capital investment of $40 million toward the project – the single largest investment it has ever made with a partner in its headquarter community. The center, which is expected to range in size from 250,000 to 300,000 square feet and cost approximately $120 million to construct, will cover four city blocks to redefine a vacant corridor near the Marquette Interchange. The Athletic Performance Research Center will span 12 acres, bordered by 6th Street, 10th Street, West Michigan Street and the Interchange.

“This partnership is a true differentiator, bringing experts from health care, higher education and the highest level of sports together to take health science, innovation and research to the next level,” said Nick Turkal, MD, CEO of Aurora Health Care. “We are looking forward to providing unprecedented research and training opportunities at this world-class facility, which will help serve as a catalyst in further revitalizing Milwaukee’s downtown region and be a driver for long-term positive change.”

Lovell and Turkal have prioritized growing scientific research for their institutions, and the facility will function as a central hub for research evolving in emerging fields, including exercise physiology, athletic training, biomedical engineering, and fields involving nutrition and rehabilitation.

As announced last year at Lovell’s first Presidential Address, the Milwaukee Bucks will also play a key role in the center, which will support elite intercollegiate and professional athletics, academic research and campus health and wellness initiatives.

Groundbreaking is planned for 2017, with the goal of opening the facility near the time the Milwaukee Bucks open their multi-purpose arena and sports and entertainment district.

Today’s announcement further builds on the long and collaborative relationship between Marquette University and Aurora Health Care – specifically with Aurora Sinai Medical Center. The two entities have been neighbors for more than a century, and Aurora has provided student training opportunities for decades. Over the last year, Aurora Health Care and Marquette University have been working side-by-side as two of the anchor institutions of the Near West Side Partners initiative, aimed at helping to revitalize and sustain this area of Milwaukee as a thriving business and residential corridor.