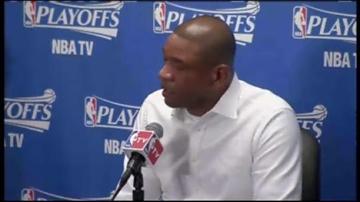 MILWAUKEE-\"A lifetime ban is a lifetime many. It speaks for itself and yes, I think that's the right decision.\"

That was reaction from Marquette great and Clippers Coach Doc Rivers Tuesday night after the NBA announced fines and lifetime ban on the team's owner David Sterling for racist remarks caught on tape.

Rivers says he hasn't thought about whether or note he'll leave the team over the scandal.

He also said he and his players often heard rumors about racist behavior by Sterling but never had any direct evidence until they heard the now infamous recording.

\"It's not over,\" Rivers told reporters before the game, \"but this is the start of the healing process. That's what we need.\"

NBA Commissioner Adam Silver said he would do everything in his power to see that the Clippers team is sold.

The CBS affiliate in Los Angeles is quoting a source that say Sterling has no intention of selling the team.

In Milwaukee, local residents who play and coach basketball share their thoughts on the comments made by Donald Sterling.