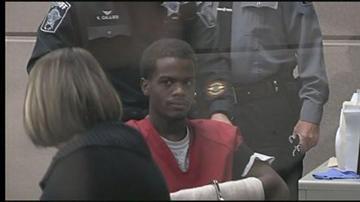 WAUWATOSA -- 22-year-old Ashanti Hendricks is facing a new criminal charge in regards to the Children's Hospital incident. Hendricks was the man shot by Milwaukee police as they attempted to arrest him on an outstanding bench warrant. New details recently released showed the infant Hendricks was holding when police confronted him was injured.

According to the criminal complaint, Milwaukee police received a call alerting them to the location of 22-year-old Ashanti Hendricks. Hendricks had a warrant out for his arrest for failing to appear in court.

The complaint says Milwaukee police officers were dispatched to Children's Hospital to check for a wanted suspect. Officers Acosta and Thompson found Hendricks inside a hospital room holding a baby. Officer Acosta reported that he ordered Hendricks to put the baby inside a car seat on a futon in the room.

Hendricks tried to run out of the room, but Officers Acosta and Thompson both held him in the doorway.The complaint says they Officer Acosta lost control over his left arm and felt pain. According to Acosta this is what allowed Hendricks to escape the room, and run into a common hallway.

New details released show that the infant Hendricks was holding was either dropped, thrown, or fell. Court documents say someone yelled for hospital staff to check on the condition of the infant as officers attempted to subdue Hendricks. Eventually a nurse made it into the room, and found the baby crying. There was not immediate visible injury, but scans show the child suffered a skull fracture.

In the criminal complaint, Acosta says he and Thompson ordered Hendricks to drop his gun while pursuing him. Acosta told detectives Hendricks ran into a dead-end hallway, and began running at the officers that were chasing him. Officer Acosta allegedly fired only two shots and injured Hendricks. Hendricks was hit in the arm, and continued running.

The criminal complaint states Hendricks eventually dropped his gun, and began to comply with officers' commands to get on the ground. Between this point and his handcuffing Hendricks attempted escape a couple times.

The Milwaukee County District Attorney's Office has charged Hendricks with two counts of bail jumping, possession of firearm by a felon, obstructing/resisting an officer, and physical abuse of a child.

If convicted of all four charges, Hendricks could serve up to 26 years and three months in prison.
Share this article: