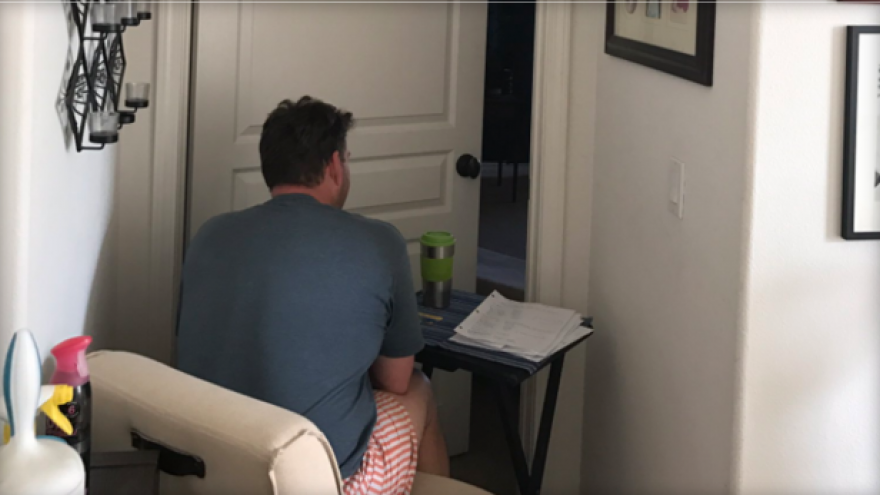 (CBS) After nearly 18 years of marriage, John Newman has hardly left his wife's side — after all, he vowed to be there "in sickness and in health."

So when Marci, 49, was diagnosed with thyroid cancer in October, John was there for all of the doctor appointments, surgeries and treatments.

A few weeks ago, Marci had an hours-long surgery to remove the cancer. Afterward, she had to undergo radioactive iodine treatment, which helps destroy thyroid cancer cells, their 17-year-old daughter Mackenna explained.

Marci then had to stay in isolation for five days to avoid exposing other people to radiation. She stayed inside a bedroom with the doors closed insider her family's home in Temecula, California.

"On the first day my dad sat outside in the backyard and talked to her through the window," Mackenna said. "The last two days is when he set up the little desk to stay with her."

Dressed in his pajamas, along with Marci, John drank his coffee and read his papers. Sometimes he would talk to her or even read a book out loud, but other times it was enough for Marci just to know he was there.

"As long as they're together," Mackenna added.

"My mom has to stay in her room in isolation for her cancer radiation so my dad set up a desk at her door to keep her company and I'm crying," she wrote.

The tweet was shared more than 10,000 times and received 13,200 likes. Hundreds of people responded, some even sharing photos of their own supporters.

"Amazing...may she heal soon. My heart goes out to you and your family. Stay strong you have an amazing Dad," one Twitter user wrote.

"This is my 7 year old sitting in my door way as I was in isolation," another commented. "Thyroid cancer here too. Stay strong and stay positive."

Mackenna was surprised by the social media response, but not her dad's actions.

"This is how our family is. We take care of each other," Mackenna said. "She knew he would do it for her."