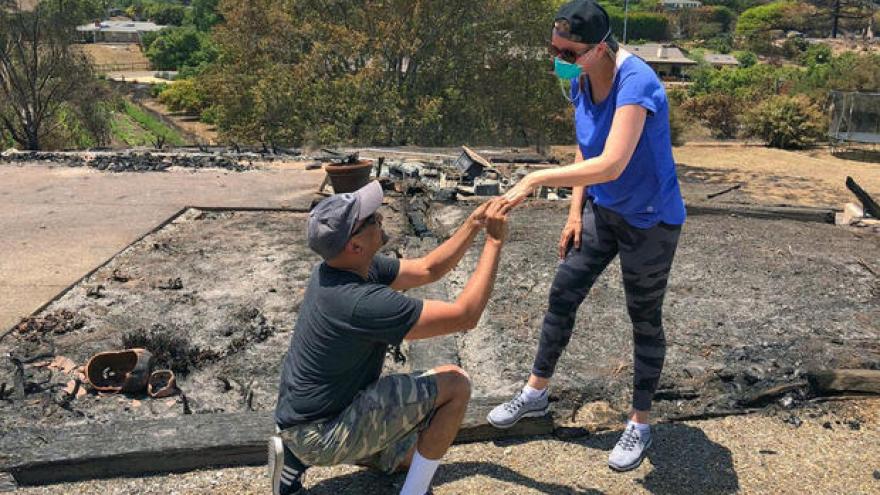 LOS ANGELES -- (CBS NEWS/AP) A Southern California couple who lost their home in a wildfire made a new happy memory Sunday amid the ashes when they found what was left of the wife's wedding and engagement rings. Ishu and Laura Rao, who got married only eight months ago, returned to the rubble of their home in Goleta in Santa Barbara County, to look for the rings. The house was incinerated in a fast-moving wildfire Friday that destroyed nine other homes; the blaze was 80 percent contained Sunday.

Ishu Rao found the charred rings amid the ashes after figuring out where the kitchen sink was by looking for pipes.

Laura Rao takes the rings off at night and was getting ready for bed when the fire broke out, giving the couple just minutes to make it out alive with Ishu's 12- and 14-year-old daughters, three dogs and a cat.

When he found the rings, Ishu Rao said he decided to get down on one knee and ask his bride to marry him, again.

"She's the most beautiful woman I've ever known, she's the glue in our family, and I adore her to pieces, so if I can put a smile on her face I'm going to do it," said the 48-year-old.

The proposal had Laura Rao in tears - the good kind.

"It put everything into perspective," the 39-year-old said. "It took all the pain away and reminded me of what matters in life: the people around you."

Mike Eliason, a spokesman for the Santa Barbara County Fire Department, witnessed the tearful proposal, snapped a photo and shared it on Twitter.

"It was truly a special moment out of the ashes," he said.

The photo shows Ishu Rao on one knee, putting the ring on his bride's finger, their charred home in the background.

Meanwhile, firefighters continued to build containment around several destructive wildfires burning in California, though one stubborn blaze in the northern part of the state grew significantly and crossed the border into Oregon.

The blaze on the California-Oregon state line known as the Klamathon Fire grew to 55 square miles and leapt into Oregon overnight. It was 25 percent contained.

The fire, one of many in the drought-ridden U.S. West, killed one person in their home and destroyed 72 structures, including houses.

It also injured three firefighters, including one who had severe burns to his face, according to a Gofundme page that raised more than $28,000 for him in less than 24 hours.

The Cal Fire firefighter, Brandon Feller, was injured battling the blaze the day it broke out on Thursday but was making a strong recovery, according to the page.