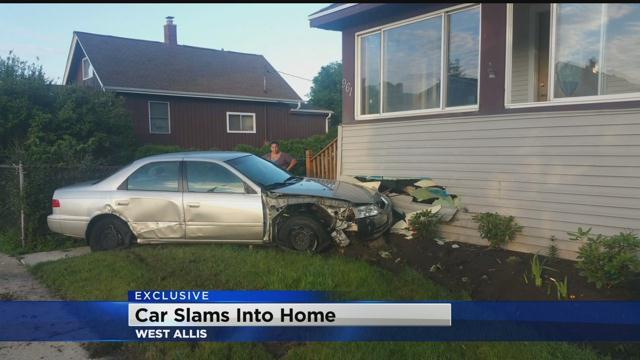 A man is under arrest after driving his car into a home in West Allis on Monday morning.

Residents of the home say something needs to be done to make the street safer.

The accident happened near South 60th street and Mineral Street.

The resident who lives in the house said he doesn't always feel safe here.

He said this is the second accident here in a week's time. This is just yards away from the scene of the deadly crash that happened on Brewers Opening Day.

West Allis Police said a 30 year old man was arrested for drunk driving after he plowed into the front of the house.

No one was hurt, but you can see visible damage to the foundation of the home.

You can also tell from the video that the driver apparently took out two street signs before driving over the curb and into the yard where he came to a stop in the front of the house.

The young man we spoke to lives here with his family and tells us safety is always on their minds.

"This is a very high traffic area and the cars do seem to just be zooming down. There are street lights but a Lot of the time the cars just go really fast. We had 3 kids that live here and the neighbors have another 3-5 kids, not sure how many. But we do prefer the kids play out back because of the high traffic," said Ramone Roche Maldonado.

That resident tells us his family is hoping for help from the insurance company to fix his property.

CBS 58 reached out to the Mayor of West Allis to see if there are any planned step to make this stretch of road any safer.