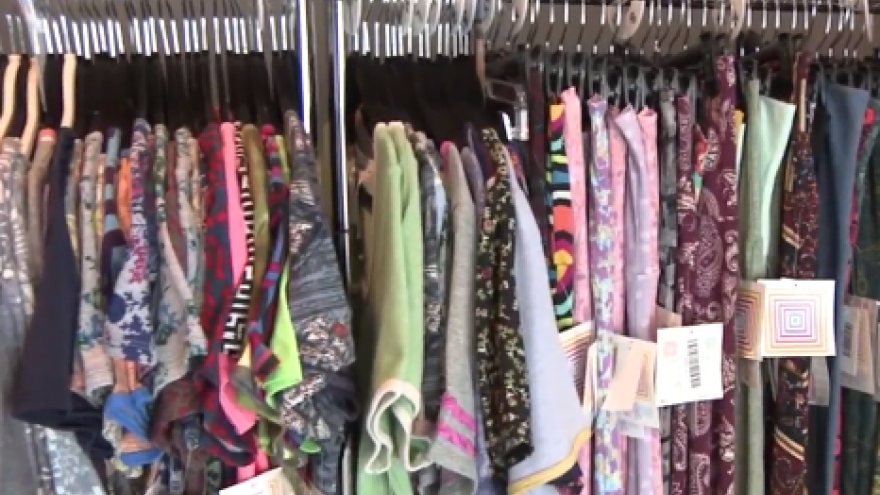 NEW YORK (CBSNewYork) — LuLaRoe, known for its unique patterned leggings, has been filling the closets of countless mothers across the country, but now some who have invested thousands of dollars to sell the popular product say it’s a bad business deal.

As CBS2’s Hazel Sanchez reports, if you’re a woman with a social media account, chances are you’ve seen people selling clothing by the company.

The California based multi-level marketing business was made popular by its colorful leggings and clothing, which it claims are made to fit every shape and size.

“After wearing the LuLaRoe maxi skirt, I will never buy another skirt,” Ashley Gauthier, a LuLaRoe independent retailer, told Sanchez.

Gauthier, a mother of two from Sparta, New Jersey, loves the clothes so much, she’s been selling it for two years. She’s doing so well, she quit her job as an administrative assistant to take on LuLaRoe full time.

“I would absolutely encourage others to join, because I know what it’s done for me,” she said.

On its website, Founder Deanne Stidham encourages people struggling financially to “join the movement” by selling LuLaRoe clothing. Since the company launched four years ago, more than 81,000 people in the United States have become independent retailers. They make money from their personal sales and by recruiting more people to join the team.

“That’s why I started LuLaRoe. I wanted to help others succeed,” Stidham says in a video on the company’s website. “Don’t you see this is an answer? This is easy, this is fun.”

However, many current and former LuLaRoe retailers say it’s far from easy or fun. More than 30,000 have joined a LuLaRoe defective support group on Facebook and have reached out to former LuLaRoe consultant Christina Hinks, who writes extensively about negative experiences with LuLaRoe on her blog MommyGyver.com

“I probably receive anywhere from 100 to 500 messages a day,” she said. “And their gripes are anything from, like I said before, the over saturation to the quality.”

One New York mother of two and full time teacher, who asked not to be identified because she fears retaliation from LuLaRoe, is like many other retailers who claim the company misled them about the risks and overstate the rewards of selling its clothes.

“I feel like a failure,” she said. “Because I believed in a pipe dream.”

The woman showed CBS2 more than $20,000 worth of inventory she purchased wholesale. She’s struggling to sell it all, because she says the market is over saturated with LuLaRoe salespeople. She’s  now part of a forming class action lawsuit claiming the company is a pyramid scheme.

“There’s always a constant push to order, order, order. And there is a big push to recruit — bring people on your team so then you’re making a profit off of their orders,” she said.

“Pyramid schemes are a scam, and you have to sign up people to make money. With LuLaRoe, the majority of our retailers actually make a profit from just selling clothes, not from signing up other retailers,” he said.

LuLaRoe says it onboards anywhere from 150 to 300 new retailers a day, and there’s no cap on how many more can join. Each person makes a company required initial investment of at least $5,000.

Deborah Israeli, of Wall, New Jersey, says she’s been successful selling LuLaRoe, but the reality is “nobody’s going to get rich from selling a $25 pair of leggings.”

Now, many independent retailers are going out of business. This comes while LuLaRoe fights off multiple lawsuits, including one filed in federal court in California that alleges LuLaRoe knowingly sold defective clothing to the public.

Israeli has bins filled with LuLaRoe clothing that she says arrived ripped or with holes right out of the box.

“And these are brand new, literately,” she said.

“We take any concerns about our company very seriously,” Lyon said.

The Better Business Bureau has received hundreds of customer complaints about LuLaRoe and has given the company an “F” rating for failing to respond or resolve the issues.

CBS2 asked LuLaRoe about the lawsuit against them regarding defective clothing, but they would not comment about pending litigation.