Lost dog has NYC adventure before winding up in deli 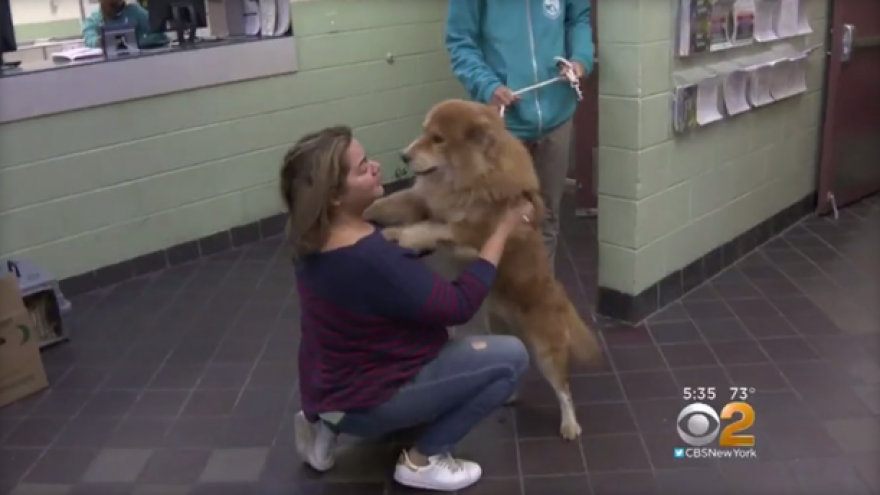 NEW YORK (CBS)  -- A frightening search throughout New York City for a dog that high-tailed it had a happy ending Friday.

As CBS New York reported, the dog got off his leash in Brooklyn and ran for Manhattan.

Gwen Wunderlich adopted her chow named Cash six years ago. On Friday morning, she was on a plane on the tarmac at LaGuardia Airport when she got a frantic call from her dog walker, saying that Cash had somehow wriggled out of his collar and leash and took off.

Wunderlich got off the plane, which had already started taxiing.

"I told the stewardess. I got up, and she was like, 'Are you sure? We can only turn around for emergencies.' I'm like, 'this is an emergency for me,'" she said.

She turned to the police, who told her a dog had been spotted in traffic on the Brooklyn Bridge, several blocks from her home. She posted her search on social media and immediately started getting calls about other sightings of Cash in lower Manhattan on the other side of the bridge.

Wunderlich got word Cash had been spotted in Manhattan's East Side in the 50s.

She kept getting updates from her friends who were also on the hunt all over the city. She found lots of strangers who had seen him.

"Earlier this morning, a coworker of mine saw him there. I think people tried to get him, but he ran this way," one woman said.

"Oh my God, we tried to get him so bad. I took my leash off my dog, and he went down Second Avenue," another added.

Seven hours after Cash had run off, Wunderlich got a call from Animal Control.

He had walked into a deli at Manhattan's 18th Street and Eighth Avenue, went behind the counter and wouldn't leave. Police were called and Cash made it to Animal Control, where the best friends were reunited after the journey of a lifetime.

Cash was not micro-chipped, but that's the first thing Wunderlich took care of. She plans to have a welcome home party for the dog Friday night.

You can watch the video of the dog with her owner here.