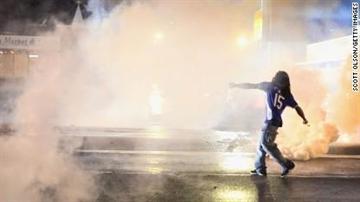 Saturday marks one week since Michael Brown died from police gunfire, and protesters plan to commemorate the moment he died with a vigil across from the Ferguson police station.

At noon, near the hour that Officer Darren Wilson shot Brown, 18, in the Missouri town, protesters will silently raise their hands into the air.

That's what Brown did before he died, witnesses say, while Wilson kept firing at him.

A second rally is planned for 3 p.m. (4 p.m. ET) near St. Louis' Gateway Arch, with members of Brown's family expected to attend.

Looters began Saturday's pillage at the Ferguson Market and Liquor store, which has become part of the case surrounding Brown. Shortly before Brown was shot last week, police say, a man fitting his description allegedly stole cigars and roughed up a store clerk as surveillance cameras recorded.

Release of the video on Friday angered some, who say police were using it to distract from Brown's killing and make him look bad.

More than two dozen people blocked off the store with cars early Saturday, then officers commanded them through loudspeakers to free it up.

Instead, bottles flew, mayhem erupted, and looters ransacked the store, which the owner had boarded up. It was the first of at least three stores raided.

Looters ran out of shops with boxes stacked in their arms up to their chins. Behind them lay overturned shelves, spilled goods and wrecked displays. All the while, police stayed back by their armored vehicles and observed but did not stop them.

Three Molotov cocktails pummeled the roof of a Domino's Pizza, burning a hole, before firefighters put the flames out.

About an hour later, about a dozen people lined up to block Ferguson Market and Liquor's entrance, saying they were keeping looters out. But before sunrise, looters returned there for a second round.

Owners of the raided stores expressed frustration that police, looking on nearby, didn't stop the looters.

\"I understand that you're not safe either, but you still have a job to do now, and now you're not doing your job,\" Tanya Littleton, owner of the looted Feel Beauty Supply, said about police in an phone interview with CNN.

The beauty store's floor was littered with broken glass and merchandise, video from CNN affiliate KTVI showed. Looters took off with hair extensions worth at least $200 a bag, Littleton said.

\"We're shut down for a while. It's not safe, and the police are doing nothing about it,\" she told KTVI.

Also targeted was Sam's Meat Market and Liquor. After hearing that people grabbed chicken, bacon and spirits from their store, the owners arrived with guns and stood outside, warding off any further raids.

Jay Kanzler, lawyer for Ferguson Market and Liquor, said police did nothing to stop the looting in town.

\"Don't know why the ... police didn't do anything. They were told to stand down and I don't know why,\" Kanzler said.

Prior to the bedlam, protests had been peaceful late Friday, continuing the mood that taken hold the previous night, when quiet had returned to the Missouri town after consecutive nights of violence between protesters and police.

The new security arrangements led by Missouri State Highway Patrol Capt. Ron Johnson seemed to have calmed tensions that day. He had bonded with the community, becoming the figurehead of softer crowd policing and unblemished protests.

Brown's family and protesters in Ferguson demanded, for nearly a week, to learn the name of the officer who pulled the trigger. Ferguson police delayed the release, citing safety concerns and saying that police had received death threats.

But their announcement triggered disappointment and criticism, because it was coupled with the surveillance camera video and other material incriminating Brown.

Documents fingered the teen as the \"primary suspect,\" who walked off with a box of cigars valued at $48.99. They also named a key witness in his shooting case, Dorian Johnson, as the \"second suspect\" in the theft.

But Ferguson Police Chief Thomas Jackson later said Dorian Johnson neither committed nor was complicit in any crime.

Johnson said he was with Brown at the time of the shooting and that Wilson shot Brown without provocation.

\"We wasn't committing any crime, bringing no harm to nobody, but my friend was murdered in cold blood,\" he told CNN affiliate KMOV.

Two witnesses say Wilson, 28, shot Brown multiple times, as he tried to break away from the officer. The same two witnesses have contradicted the claim by police that Brown had fought with Wilson in his patrol vehicle and groped for his gun.

No one has disputed witness accounts that Brown was unarmed when he died.

One side of Wilson's face was left swollen after the confrontation, police said.

Hours after the material was made public, Chief Jackson told reporters that the robbery wasn't the reason Wilson stopped Brown. Rather, he said, it was because he was \"walking down the middle of the street blocking traffic.\"

Jackson expressed \"every confidence\" in Wilson, who has been a police officer for six years, four of those spent on Ferguson's force.

Police have said that evidence and testimony in the shooting will be presented to a grand jury, which will decide whether Wilson should be tried.

Complete coverage of the Ferguson shooting

The tall, sturdy young man in the video \"appears to be\" Brown, said his family's lawyer Benjamin Crump. But the family wasn't informed of the robbery or store surveillance video ahead of time, he said.

And it's immaterial, said Eric Davis, who is related to Brown.

\"It's a diversion, and it's an attempt to smear Michael's character,\" he said. \"It (should be) more about what happened on Canfield Drive, where Michael was executed.\"

Johnson, the Highway Patrol captain, also was sour on the information release. The robbery and Brown's shooting \"are separate issues,\" he said.

\"I told (Chief Jackson) I think both of those being released today was not needed and was not the way that we needed to go,\" he said.