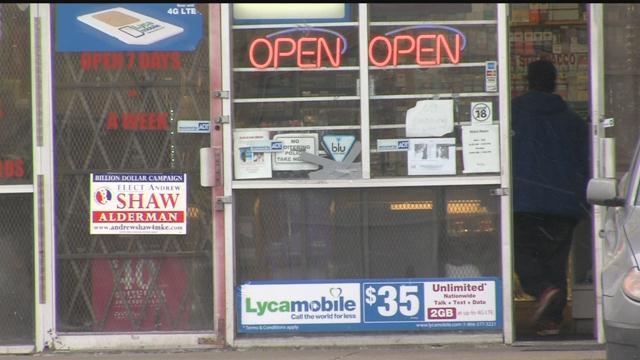 "Frankly it's become a one stop shop for drug activity."

More than 400 911 calls in 2 1/2 years at this one business. The city of Milwaukee says it has evidence pounds of high grade marijuana are kept in the bathroom of this tiny shop, along with crack cocaine to be sold in and around the business.

The city also has evidence illegal guns were sold at this shop.

"Locations begin to be designated as an underground marketplace… where the underworld knows you can go to to transact some sort of illegal business," said Bauman.

Bauman says 27th Street Tobacco and Wireless is one of the most egregious examples of an underground marketplace operating in plain sight.
He says many people in his neighborhood are sick of the place.

"They should be angry but rather than burning down the store… they hopefully do what civilized people do… they contact their elected representatives… they contact me demanding action," said Bauman.

If 27th Street Tobacco were a liquor store, bar, or restaurant, it would've lost its license and effectively been shut down by the city years ago. However, since the store is a standalone tobacco shop, a loophole in state law doesn't allow for that.

"This kind of gap in state law is somewhat unique and maybe it's because traditionally we've never had standalone tobacco stores like we seem to be having more of."

A tobacco store won't lose its license unless specific violations involving illegal tobacco sales are found. Local leaders argue that has basically allowed for some people to use tobacco shops as a front for crime. As smoking rates fall nationally, Milwaukee has seen the number of stand alone tobacco stores rise: from 33 in 2011 to 51 in 2015.

"And they have license to do business almost without condition… without accountability."

"We apply that high standard to the liquor store... to the bar... to the convenience store. This is about having an even playing field and not allowing one business... and one loophole to be an anchor to economic development for an entire corridor," said Goyke.

Some of Milwaukee's largest companies are lining up behind the bill: Aurora Healthcare, Potawatomi, Harley-Davidson, Marquette University, and Millercoors.

Lawmakers say this bill would wipe out the untouchable status a tobacco license currently has. Goyke, Darling, and Milwaukee city officials are expected to testify for the bill during a committee hearing Tuesday afternoon in Madison.