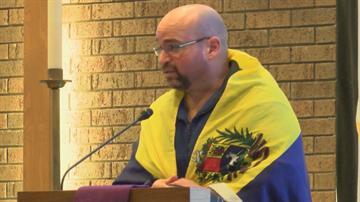 MILWAUKEE- On Sunday, in Milwaukee local Venezuelans called for an end to the violence in the country.

Dozens have died as result of weeks of protests in Venezuela.

They are angry with the governement, specifically over high inflation and shortages of basic goods.

The small group asked for peace after more than thirty people have died amidst the political unrest.

The country's president accuses anti-government protesters of planning a coup against his government.

Government supporters have held demonstrations of their own.