Local Ukrainians talk about violence in the country 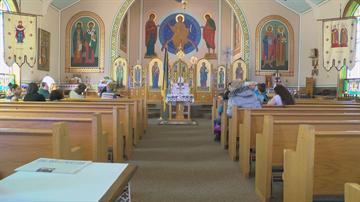 MILWAUKEE- The St. Micheal's Ukrainian Catholic Church in Milwaukee held a special mass on Sunday to remember those who died during the violence in the Ukraine.

Similar prayer was also done in the country.

Sunday marked the end of a week of gun battles and violent clashes that killed scores of protesters demanding political reform in the Ukraine.

The parishioners at St. Micheal's said they were following the news coming out of the country closely.

Many of them have family and friends that still live there.

They have been supporting the opposition with money, pictures, and even art projects from children.

Eighty two people were killed in pitched battles between the Maidan protesters and security forces, who earlier in the week brought out snipers to shoot them down.

The parishioners said the fighting comes down to freedom issues.

Yanukovich fled the capital Kiev on Friday and his whereabouts were still unknown on Sunday.