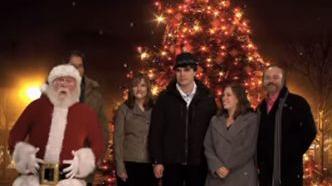 For years now, CBS 58 News has followed the journey of Eric Look.

Look has Autism and has found music to be a crucial activity in his own personal growth and connecting with people.

Along with Uncle and Mother, Eric began writing Christmas songs.

Throughout the years, other stations with holiday music formats around the country have also picked up and played Eric's Tunes.

Eric was a special live guest Monday on the CBS 58 News at 4 p.m. to talk about this year's song.

Atkinson was also be in studio to talk about the strong bond that has been formed since he first gave Eric's song a spin.

93.3fm and 1290am were the first stations to give his songs airplay which led to  airplay at stations in Madison, Sheboygan, Chicago, Philadelphia and also at stations in Iowa, Michigan, Minnesota and Arkansas.

While some station told Eric he had to be an established aritst to get air time, Stan, who was Emcee for Autism Speaks, knew that this was a special artist who had to be heard.